The place of Hindi in the nation : The Tribune India

The place of Hindi in the nation

WITH the Central government making efforts to get Hindi accepted as one of the official languages in the United Nations, the ''national'' language issue has once again reared its ugly head. 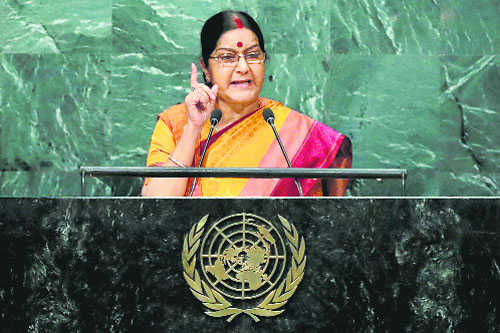 Karthik Venkatesh
Editor with a publishing house and freelance writer

WITH the Central government making efforts to get Hindi accepted as one of the official languages in the United Nations, the 'national' language issue has once again reared its ugly head. It behoves the general public, especially those of the non-Hindi speaking states, to remind the government that Hindi is not this nation's 'national' language. No language can lay claim to that position. Hindi, along with English, only enjoys the 'official language' status. Close to two dozen other languages enjoy the 'scheduled language' status and are on a par with the official languages. Hindi is as 'national' or in reality, as 'regional' as these other languages. No more, no less.

In such a scenario, singling Hindi out as a 'representative' language of the nation is fraught with serious issues. Does Hindi represent the ethos of all of India in the same way as, say, English in the United Kingdom or Arabic in Egypt? Can Hindi claim to be understood in all parts of the country in its entirety? Has the education system of the country developed to the extent that it is Hindi that is largely in use in school and higher education? Is it likely in future that India's foreign ministers will only speak Hindi and have no knowledge of English? The answer to all of these questions is an unequivocal no. So, why Hindi?

When one language from a linguistic Tower of Babel like our country, is singled out for special treatment internationally, it is important to dwell on the message thast goes across to the world. The message is one of Hindi as a language 'representing' the nation. It suggests its acceptance as the nation's lingua franca and that it is 'preferred' by the people of this nation. These statements are wrong in the extreme and there is no scope for a debate on the rationale behind such blinkered thinking.

One suspects that the real reason behind this move is in part to further drive home the 'Hindi, Hindu, Hindustan' message that has been behind many decisions. The multi-hued India is sought to be painted a uniform shade of saffron. A saffron that is preferably to be termed 'bhagwa'! It is purely this consideration that is behind this move. This argument flows from the European ideal of the nation: one language, one nation and one culture. It is this ideal that the right-wing has long sought to implement in the body politic. For all its claims of 'Bharatiyata', a European ideal appears to be the moving spirit behind the party's thinking.

Then there is the centralising tendency of the government to consider: that all power and decision-making rests with the PM. The PM would prefer that the government flow from the Centre towards the states which would then do the Centre's bidding, specifically the PM's bidding. The federal structure of the country is thus sought to be emasculated. It has been done once before when a strident Indira Gandhi dominated the show in the seventies and eighties. That ghost has now returned in a more fiery form. By positing one language as the national language, the country's federal structure itself is sought to be challenged.

That the government is setting forth on this misguided path only a few months after the Catalonia fiasco that has threatened to tear Spain asunder is doubly puzzling. In a series of assertive moves, the Catalans have all but broken with Spain, all over the issue of language and culture. Only a very thin line separates the Catalan region from near-certain independence. Spain's unity hangs in the balance.

So, what is the logic behind taking Hindi international? Among the more fantastic claims proffered is that Hindi is not merely an Indian language. Trinidad and Tobago, Guyana, Fiji, Surinam and Mauritius are Hindi's overseas homes, it is claimed, and the language becoming official at the UN would help those countries too, the fervent hope. But really, the question is whether these countries prefer Hindi to the exclusion of the other languages that are also spoken there. Aren't the official UN languages like English or French not of any use to these countries? Given the colonial background of these countries, English and French are well understood there. Hindi does not give them a special leg-up. If international usage is the criterion, then Tamil, Punjabi and Bengali, too, are spoken in countries other than our own. Why not bat for all of them? To prefer Hindi is to disrespect our other vernaculars, all disclaimers by the powers-that-be notwithstanding.

Is the Indian government's move partly prompted by 'neighbour's envy'? Does it rankle that Chinese, the language of our large neighbour to the north, is an official language? Then the smart thing to do would to be seek a restructuring of the Security Council's permanent membership which is really where China's power flows from. That would be a long and weary battle. Propping up Hindi is not bringing India any special powers. But, it will certainly add to costs as India will be required to fund much of the translation and interpreting work that comes with the official status.

Hindi already enjoys wide acceptance within the nation. The 'soft power' of Bollywood and the migration patterns of India's people are doing their bit to give Hindi a non-threatening place in the country. Why then queer the pitch with a move that only smacks of arrogance and insensitivity?