The real butchers of Punjab

Those who KPS Gill described as the ‘defeated rump of terrorism’ in Punjab, the disgraced and beaten dregs of the Khalistani movement, have, for decades, kept up a campaign against him and the Punjab Police, from the safe havens in Pakistan and the West. 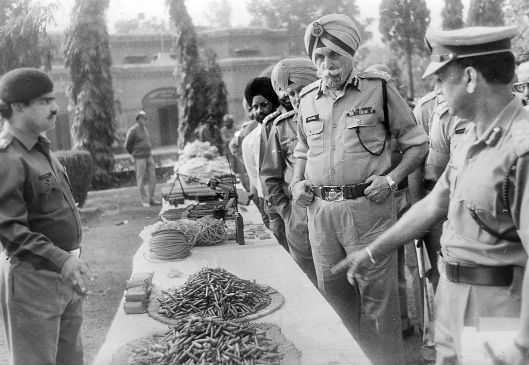 In the line of fire: KPS Gill fought terror with courage, leading from the front.

Those who KPS Gill described as the ‘defeated rump of terrorism’ in Punjab, the disgraced and beaten dregs of the Khalistani movement, have, for decades, kept up a campaign against him and the Punjab Police, from the safe havens in Pakistan and the West. Now, nearly two years after his death, a more local variety of rabble-rousers are gathering courage to initiate a campaign of abuse against Gill. A flood of unfounded allegations, false claims of genocide, an unending whisper campaign, and demonisation grow more voluble against a background of rising radicalisation and incidents that signal an incipient resurgence of Khalistani terrorism.

For long, Khalistani formations alleging ‘genocide’ have claimed, with not a shred of evidence, that between 1 lakh and 2.5 lakh Sikhs were killed in the counterterrorism campaign in the state. The reality is, a total of 21,532 persons were killed between 1981 and 1995 in connection with Khalistani terror, including 8,090 categorised as terrorists; 11,696 civilians, almost all killed by the Khalistanis, but including some who lost their lives in ‘crossfire’; and 1,746 security force personnel (1,415 of the Punjab Police alone) killed by the terrorists.

A majority of these fatalities occurred when Gill was not in charge. In the worst phase of the insurgency, 1990-91, when his operational command was first undermined and he was removed from Punjab, 5,058 civilians and 973 security personnel were killed, and Punjab was brought to the verge of disintegration as the VP Singh and Chandra Shekhar governments sued for peace with the Khalistanis. After Gill was brought back, 1,566 civilians and 277 security personnel fell to the terrorist bullet and bomb through 1992 and 1993, and peace was restored; political parties participated in municipal, panchayat and Assembly elections, and a constitutional government was squarely in charge. This outcome was not achieved through any indiscriminate slaughter: 3,497 terrorists were killed through 1990 and 1991, while the state vacillated, and 2,911 terrorists were killed through 1992 and 1993, after Gill resumed command, and the Khalistani movement collapsed.

Why are the police leaders of the periods preceding and intervening between Gill’s tenures never mentioned by the Khalistanis, despite the far greater loss of life — in all categories — under their command? Why is Gill the supposed ‘butcher of Punjab’?

The Khalistani ire against Gill is not because more people were killed under his leadership, it is because he exposed, shamed and comprehensively defeated the Khalistanis. The surviving leadership fled to skulk in Pakistani havens, or fulfilled their dream of asylum in Western states, from where they continue to froth against the ignominy of their humiliating failure. Gill was effective because the use of force under his leadership was focused, targeting the fractious leaderships of the Khalistani movement, and gave opportunity to the rank and file to return home to normal lives. He fought terror with courage, leading from the front.

The mythmaking against Gill, however, is indispensable to terrorist justification — when the murder of random innocents is the essence of your strategy, it is necessary to vilify the adversary who brought you to your knees, to distract from your own demonic acts. While the campaign against Gill builds on falsehood, there are publicly established acts of mass murder executed by the Khalistanis. Indeed, these real butchers were responsible for some of the most appalling slaughters of innocents.  Among the most egregious of these were the train massacres in which 74 persons were murdered in cold blood in January 1991, another 76 in June the same year and 52 that December; the slaughter of 38 bus passengers in July 1987; the killing of 35 at a festival gathering in March 1988; and of 33 killed in indiscriminate firing in a crowded market in 1990, among numberless other acts of carnage. About 65 per cent of all civilians killed by the Khalistanis were Sikhs, the community the terrorists claimed to be fighting for.

Worse, from a Khalistani perspective, Gill exposed their cowardice before the world. The ‘kharkus’, who had sworn to fight to the last man, came out, their hands raised in the air, at the end of Operation Black Thunder, even as the world media watched. Gill led the media into the cavernous ‘tehkhanas’ of Akal Takht, where corpses of women — raped and tortured for months, and brutally executed — were discovered. The recovery of mutilated corpses in sewers around the Golden Temple had become routine in the prelude to Operation Black Thunder (as before Bluestar earlier). On all this butchery and defilement of the Golden Temple, the vociferous advocates of ‘Khalistan’ maintain silence.

These atrocities against innocents by the Khalistanis were a conscious choice, and an equally conscious rejection of the Sikh way of war, of the idea of ‘sant-sipahi’, of the ideal of the Gurus and their companions who embraced torture and death, rather than accept any act that would bring the faith to dishonour, or bring suffering upon innocents.

Gill also exposed the widespread indignities the Khalistanis inflicted on the general population: the routine rape of women in homes where the terrorists sought forcible shelter; the intimidation and murder that facilitated their extortion; and the accumulation of wealth, the networks of organised criminal enterprises that the terrorist leadership developed.

Gill didn’t just defeat the Khalistani terror in Punjab; he restored the pride and honour of the Sikhs.