The rise of predatory State

Two seminal events occurred during the first decade of the current millennium whose fallout continues to shape the political, ideological and economic trajectory of states across the world. 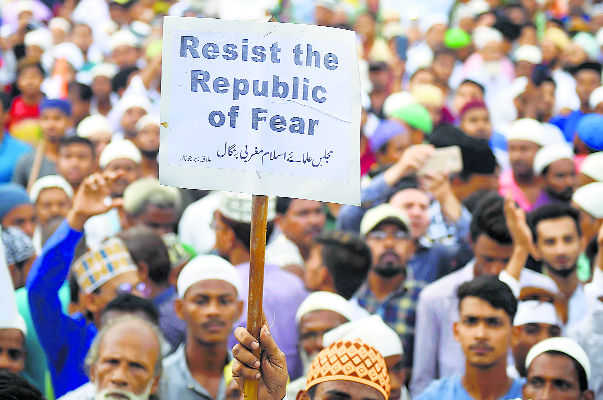 Deadly game: The security argument has been made more potent by notions of nationalism, enabling political dispensations to wield power without responsibility.

Two seminal events occurred during the first decade of the current millennium whose fallout continues to shape the political, ideological and economic trajectory of states across the world. Both were centred in the US, while still in its phase of unipolar ascendancy. The first was the Twin Towers terrorist attacks on September 11, 2001, and the second was the financial and banking crisis of 2007-8, brought on by sub-prime mortgage meltdown. The reverberations from these crises, which took place within just a few years of each other, continue to radiate across a world that has become densely knitted together through rapid and often poorly understood technological change. Though the two events were not related, their consequences have become intertwined in ways that are not always apparent. It is important to reflect on these developments and draw lessons because India’s own trajectory as an emerging power and the fate of its democratic polity are being altered by them.

The US response to 9/11 legitimised a significant curtailment of individual liberties and abridgement of democratic safeguards against encroachment by the State at the very heart of the liberal, democratic order. Any State is inherently predatory, irrespective of the ideological persuasion of those who hold its reins, relentlessly seeking to expand its power and influence at the cost of its citizens. Authoritarianism is the default condition of a holder of State power, which is why in democracies there are institutional checks and balances against this natural propensity of a State towards aggrandisement of power.

The phrase ‘eternal vigilance is the price of liberty’ is not just a slogan. It is an indispensable responsibility of citizens in a democracy. What 9/11 did was to elevate security compulsions above the enjoyment of individual rights. States across the world were ready to follow the US example, confident that the ‘war against terror’ would provide a convenient protective shield. It has not taken long for States across the geographical, political and ideological spectrum to realise that the security argument can be a potent weapon to abridge civic rights, weaken institutional safeguards and escape scrutiny and accountability. The security argument has been made even more potent by its association with notions of nationalism and patriotism, enabling political dispensations and cynical elites to wield power without responsibility. In the process, a citizenry fearful of its safety is becoming complicit in the abridgement of its own rights. Advances in technology are also providing States with much more efficient tools of surveillance and control. There is growing acceptance of the targeting of fellow citizens who have been branded a security threat by the State, often playing upon entrenched prejudices within society. Jurisprudence in democracies permits State action against what are described as specific and concrete dangers. But when the rule of law becomes focused on protecting citizens, not only from such specific threats, but also from potential ones, ‘every citizen is a potential risk’. The abridgement of his constitutional rights then becomes justified for his own good and for preventing potential threats to public order.

The persisting consequences of the economic crisis of 2007-8 are reinforcing the erosion of democratic principles. Free markets ensured economic prosperity and led naturally to liberal democracy, this was the mantra of the so-called Washington Consensus. Post the economic crisis, the Washington Consensus collapsed. Not only capitalism, but also liberal democracy associated with it became discredited. This enabled China to celebrate its model of political authoritarianism and State capitalism and offer it as a winning formula to developing countries. This has a seductive appeal in a world where familiar anchors, ideological and political, have been shaken. This has served to reinforce the predatory power of the State already swelled by recourse to the security imperative. The emergence of ‘strong and decisive leaders’ is a symptom of this trend and may be described as ‘dictator envy’. The road is then open to what has been called a security State.

We see these global trends beginning to be reflected in our own country. I drew attention to these dangers in the reasons advanced by the J&K Governor to prevent the formation of a government by a coalition of parties which was ready to prove its majority on the floor of the House. One of the arguments used was the security imperative. There is a direct line between the Governor’s actions then to the latest decisions on and continuing security lockdown in J&K. The recent passage of the Unlawful Activities Prevention (Amendment) Act will further add to the power of the State to act against any individual on mere apprehension of a terrorist act. We may be sliding towards a situation where security imperatives, which only the state may define, can override democratic safeguards. The economic and business environment cannot be insulated from these trends.

It is too early to say how these trends will play out in the coming days. There are contradictions which lie at the heart of a security State. It must seek legitimacy by being seen as delivering enhanced security to citizens but its hold on power derives from overplaying security threats. Similarly, its adoption of authoritarian methods must be seen as delivering enhanced economic benefits. Governance can improve only with greater accountability, which requires greater transparency. Both become casualties in such a State.

In a democracy, outcomes cannot be separated from the means adopted to achieve them. Strong institutions exist and the rule of law prevails in a democracy to ensure that the choice of means conform to constitutional propriety and do not undermine civic rights. But it is citizens themselves who must uphold their rights. States rarely seek limits to their own power.