Time for Prez to defend the Constitution : The Tribune India

Time for Prez to defend the Constitution

On January 25, President Ram Nath Kovind will be giving his address to the nation on the eve of Republic Day. 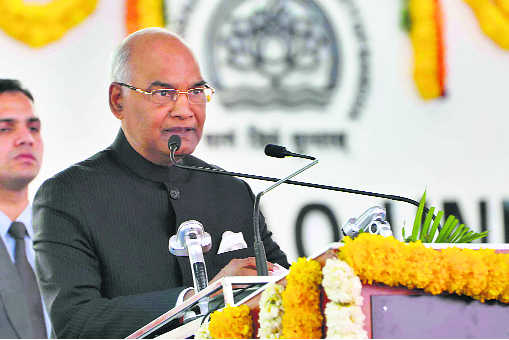 On January 25, President Ram Nath Kovind will be giving his address to the nation on the eve of Republic Day. Though the tradition has become an annual ritual which receives people's distracted nod, this time it assumes significance. This is also the only occasion in a year when the grand patriarch of the Republic reveals his hopes, his fears, and also what makes him tick - crucially, without the "aid and advice" of his council of ministers.

Moreover, in tune with a policy decision taken last March, Mr Kovind is likely to give his address in Hindi only. Since he assumed office in July 2017, there have been increasing attacks on the Constitution and the core values of the nation. It is the constitutional obligation of the President to protect the Constitution. It is to be seen whether Mr Kovind will treat these attacks serious enough to warrant his reaction. When it comes to defending the Constitution, one of his more illustrious predecessors left a good precedent to emulate.

The Rashtriya Swayamsevak Sangh (RSS) and the Bharatiya Janata Party (BJP) are critical of the Constitution for being less Indian and their preference for a more desi concoction is no secret, either. In the past, the RSS openly demanded that the Constitution be replaced with the Manusmriti, but it is no longer so specific. It is not clear whether the change is a tactical silence or a change of heart.

The current spate of attacks on the Constitution started in September last when RSS chief Mohan Bhagwat highlighted the foreign sources of our Constitution and several laws and suggested that we must address the issue.

He said, "A discussion and debate should be held on this. After a comprehensive national debate, we will have to arrive at a consensus and such system should be made available to people." As a citizen, Mr Bhagwat is perfectly within his right to demand even abrogation of the Constitution and, what's more, he has articulated his views in a scholarly fashion.

What about two of his followers — one is a union minister and other an MLA — who swore to "bear true faith and allegiance to the Constitution of India" and did the opposite?

Union Minister of State for Employment and Skill Development Anantkumar Hegde declared in December: "We are here to change the Constitution." The outrage his utterance caused forced him to retract the statement. When good faith is in short supply, the denial of an intent reinforces the intent.

Mr Surendra Singh, a BJP MLA from Uttar Pradesh, was more brazen and definitive: he announced that India would be a 'Hindu Rashtra' by 2024. Mr Singh wants it as the icing on the cake for RSS's centenary celebrations in 2025. And the government's silence is, in any case, more revealing.

Some people saw in Mr Narayanan an 'activist' President, though he was duty-bound to defend the Constitution. Not acting in the manner at the time he did would have made his position untenable.

The oath, our hope

The Constitution places an onerous burden on the shoulders of the President, a titular head, by making him swear to "preserve, protect and defend the Constitution" (Article 60). The only other place having this expression is Article 159 which prescribes the oath of office for governors. However, being the President's agents, the governors are part of the former in discharging this responsibility.

The nation has been fortunate to not have to unpack what the founding fathers had in mind when they expected the President as a legal person to defend the cornerstone of the nation. Interestingly, all other functionaries mentioned in the Constitution — from the Prime Minister to MLAs — are merely enjoined to "bear true faith and allegiance to the Constitution of India." They are not even accorded the prestige of defending the law of the land; it is suffice for their station to remain faithful to the Constitution. Therefore, the President of India is uniquely placed as the defender of our secular faith, as enshrined in the Constitution and as illuminated in the Kesavananda Bharati Judgment (1973).

The President's address on the eve of our national festival, the Republic Day, is a remembrance in gratitude how our founding fathers not only brought us independence but also created a political system that is in harmony with values like equality, freedom, rule of law, etc, that transcend country and creed. It is also a pat on our backs that, no matter how stormy the nation's sailing at the moment may be, the ship of the Republic is sturdy enough to stay its course.

The nation now stands at one of those junctures where those who are called to work the Constitution are questioning its very legitimacy with impunity. What is expected of the President to do now, like most of his predecessors did, is to instill people's confidence in the Constitution.

We can ignore at our own peril GK Chesterton's wise take on eternal vigilance: "The wisest thing in the world is to cry out before you are hurt. It is no good to cry out after you are hurt; especially after you are mortally hurt. People talk about the impatience of the populace; but sound historians know that most tyrannies have been possible because men moved too late. It is often essential to resist a tyranny before it exists. It is no answer to say, with a distant optimism, that the scheme is only in the air. A blow from a hatchet can only be parried while it is in the air."