TV bends to winds of war

IN these difficult times in Indo-Pakistan relations, the biggest casualty on the Indian side has been the credibility of privately-owned Indian electronic media. 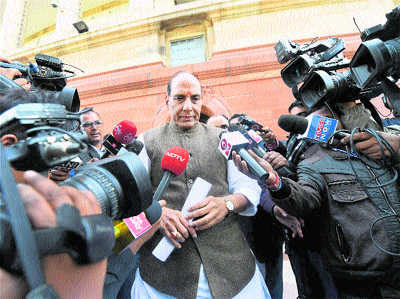 HOLD SWAY: Media can’t be the mouthpiece of the government of the day.

IN these difficult times in Indo-Pakistan relations, the biggest casualty on the Indian side has been the credibility of privately-owned Indian electronic media. Many of us have experienced how quickly the printed press folded up during Indira Gandhi’s Emergency. The wonder is that under the Modi dispensation electronic media have lined up behind the government on its own.

Many channels have become super patriots joining the most jingoist voices, but most channels have succumbed to the use of adjectives that give the game away. There is no fairness in presenting facts and it is a toss-up whether Indian channels are copying their Pakistani counterparts or chasing TRP ratings or both.

We all honour soldiers who die in the line of duty and pay them due respect, apart from compensation to their families. But for our television channels to describe every such death as that of a martyr is stretching the use of the English language. And covering Pakistan, TV scrolls describe Prime Minister Nawaz Shatif’s presentation at the UN as a “rant”. Where is the dividing line between the duties of media as opposed to acting as a propaganda megaphone for the government?

It is true that our private electronic media live in different ages. One channel has adopted what was in vogue 25 years ago, if not longer, in the West by de-sexing genders. Thus their cameramen and women are always “persons”. Another channel continues to beat its drums over the non-interview it had with Prime Minister Modi in how dramatically it has affected its TRPs.

Are we then in the game of TRPs without any responsibility to be fair in our reporting? There is not a squeak from the concerned broadcasting organisations on the merits of unbiased reporting. In relations with Pakistan, anything goes, the harder the punch, the better. One channel seems to have opened a direct line to India’s RAW to get the lowdown on the inner recesses of the Pakistani state.

What our electronic media do not realise in their cheerleading for chauvinist forces is that this phase will pass, as all phases do, but restoring their credibility with their audiences will be a long-haul problem. As their print colleagues will tell them, even after wearing sackcloth and ashes it took a long time to convince readers that newspapermen were trying to tell the truth.

There are, of course, exceptional times such as during the Bangladesh war when media went with the swing. But mercifully, we are not at war with Pakistan and can attempt to present a fairer picture of what is happening. For instance, there was not one commentator to make the point that but for Ms Sushma Swaraj’s inability or unwillingness to make her presentation in English, half of its impact was lost. Except for South Asia, the world is not familiar with Hindi and listening to a translation can never have the impact of an original presentation.

How then can we get electronic media to do a fairer job of reporting? One would have expected broadcasting organisations to take the call and seek answers. But they seem to be strangely tongue-tied leaving it to each channel to win its spurs in the propaganda war against Pakistan. The golden arches of TRPs are inviting them — and who cares about credibility?

The record of press commissions in India is hardly inspiring. Rather, we must make a new foray in getting the combined weight of serious citizens to lobby against a pernicious trend that threatens to destroy the freedom of media. The forms can vary from small seminars to larger meetings and neighbourhood conclaves focused on one problem: how to keep media from becoming cheerleaders of chauvinist forces?

Until the Emergency came, print media were patting themselves on the back that having fought for the country’s freedom, they were the great upholders of the freedom of the press. And yet more than 99 per cent of the press crumbled overnight. The moral of the story is that press freedom should be fought each day because it is the authority’s effort to exploit weaknesses.

It would be unfair to paint all television channels with the same brush and the demands of TV as a medium are very different from those of print. But this is certainly a time for introspection if even a man of the calibre of Rajdeep Sardesai can fall a victim to chauvinist trends. The atmosphere is simply too corrosive.

There is no substitute for self-policing and it is time for veterans of Indian TV to get together to frame a set of working rules that distinguishes between fair reporting and propaganda. It is not the task of private TV channels to beat the drums of chauvinism. Such an assertion will present two kinds of problems: pressure from the owners and the commercial wings in charge of TRP ratings.

But this is a battle journalists have fought all the time everywhere. The question for TV journalists is that time has arrived in India and it is up to them to show their mettle. I am not disparaging the commendable efforts of many channels for their pioneering investigative reporting of trends and controversies and enlarging the Indian viewers’ ken by demonstrating to them the wonders of nature and animals. And some channels make room for serious discussions although the highly accented Indian English of one anchor takes away part of the charm.

What I have described above relates to English language channels; channels in Hindi and regional languages are often even more extravagant in presenting news and views. They would of course need separate treatment.

As a nation, where do we go from here? First, we must separate fact from fiction and draw clear lines between responsibilities of media and the task of governance. It is not the task of media to become cheerleaders of the government of the day. Second, broadcasting organisations responsible for overseeing TV channels must come out in the open and take charge.