VVPAT-auditing data and credibility of EVMs : The Tribune India

VVPAT-auditing data and credibility of EVMs

Even as some top politicians are raising doubts and have made references to the alleged manipulation of EVMs (electronic voting machines), millions of voters in the country are getting confused. 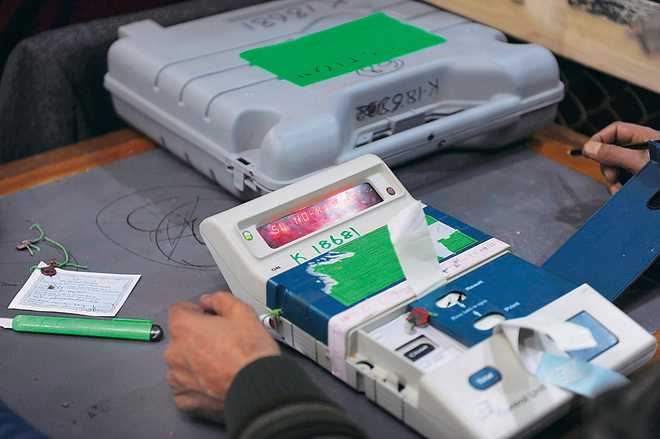 Double-checking: VVPAT-auditing of the EVMs is done to check whether the voting machines are tampered with or not.

Even as some top politicians are raising doubts and have made references to the alleged manipulation of EVMs (electronic voting machines), millions of voters in the country are getting confused. Common people don’t understand the mechanism of a complicated machine like the EVM.

Rather, they depend on the institutions and/or their leaders to frame their opinions. However, there was a VVPAT-auditing of the EVMs — five per Assembly constituency of the country — as directed by the Supreme Court. One obvious, yet important, question is how the opinion on EVMs will be reframed with the VVPAT-auditing data.

A voter verifiable paper audit trail (VVPAT) slip is nothing but a machine-generated ballot paper, verified by the voter himself/herself. And if the VVPAT counts are further tallied with the corresponding EVM counts, that would give a double-check.

The objective of tallying VVPAT counts with the corresponding EVM counts is to check whether the EVMs are tampered with or not. If there is no mismatch for a machine, one can safely conclude that there is no tampering in that EVM, at least.

While cooking rice, for example, one does not check all the grains in order to ascertain whether the rice is properly boiled or not. One uses a spoon to mix the boiling rice properly, and then check only a few grains. This mixing is very important. In a similar way, one may perform such VVPAT-auditing for a small percentage of randomly chosen EVMs. And the apex court ordered the present system of VVPAT-auditing of five EVMs per Assembly constituency in the country.

It is understandable that different people have different kinds of a priori beliefs on EVMs. Some believe that they cannot be tampered with, while some are confident that they can certainly be tampered. And millions of common voters are left undecided with regard to this conflict. As a result, they might have a partial ‘bias’ for and against the EVMs. Our objective is to study how that ‘bias’, if at all, should be reshaped after getting the EVM-VVPAT tallying data in the 2019 Lok Sabha elections.

Yes, quite often, ‘data’ is instrumental to reshape our knowledge and modify our belief.

Take a simple example. Suppose we'd like to know the nature of a school having 1,000 students —whether it is for boys only, or for girls only, or a co-educational school for roughly equal number of boys and girls. Our prior belief might be that it can be any of the three types with one-third chance (probability) each. Then, if we take a sample of three students from that school randomly (which means that each student has equal probability of being selected in the sample), and observe that all are girls, the school can be either for girls only or co-educational, with more chance for girls’ only. Thus, data modifies our prior belief towards ‘posterior’. Now, if we take another sample of three students and observe that this second lot contains at least one boy, we will be able to conclude with certainty that it is a co-ed school. But, if all of them are also girls, our ‘posterior’ belief that it is a school only for girls will be strengthened, although we still can’t rule out the possibility of co-education in that school.

In statistical literature, these posterior beliefs can be quantified by using the popular Bayes’ theorem, named after the eighteenth-century British Reverend Thomas Bayes, who pioneered the concept that has tremendous importance in the theory of probability. The theorem can be used to find the posterior probability of an event.

For example, with a sample of three students, all girls, the posterior probability that the school is only for girls reduces to 80 per cent, and with additional three more girls in the second sample, the probability of it being a  school for girls only becomes 98.5 per cent.

In the same token, we may be interested to find the posterior probability of EVM-tampering in this year’s parliamentary elections where, for most of the constituencies, VVPATs were counted in 35 machines, with a total of 20,625 in the country. With 17.3 lakh EVMs in the countrywide elections, this would mean that five EVMs were randomly selected for VVPAT-auditing from about 450 EVMs in an Assembly sector, on an average.

We now know that there were eight cases of mismatch between the counting recorded by EVMs and corresponding VVPATs in the 2019 Lok Sabha elections. Of course, the Election Commission assured us that these eight cases together constituted the mismatch of just about 50-odd votes and did not impact the final result.

Given that there is no mismatch or just one mismatch in any of the 35 machines which were VVPAT-tallied, what would be the posterior probability that there might be an EVM mismatch with respect to a particular Lok Sabha constituency? Certainly, this would depend on the individual's prior belief. If the prior belief is that some EVMs are tampered for sure, this data on slightly more than 1 per cent samples of EVMs is not enough to dislodge that belief in either case.

However, if someone has a prior perception that EVMs ‘can be’ tampered with, in general, that perception is not going to be completely nullified — at least not by VVPAT-auditing — as is clear from the application of the Bayes’ theorem.

So, unfortunately, it’s destined to be a constant agni pariksha for EVMs after every election, unless confidence in these machines among the electorate is significantly enhanced, beyond the VVPAT-auditing mechanism.