Western follies and the rise of IS 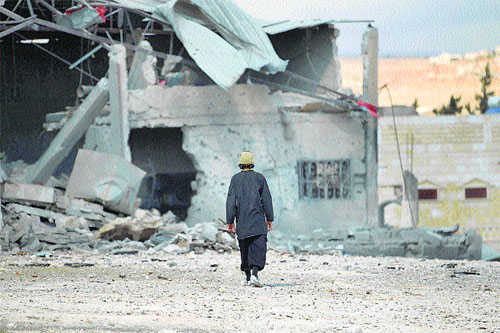 There can’t be a military solution to the Syrian conflict.

TWELVE years ago, President George Bush invaded Iraq on the specious pretext of seeking to destroy President Saddam Hussein’s alleged “weapons of mass destruction”, which really never existed. American political leaders, including the then President’s brother Jeb Bush, now acknowledge that the invasion was a political, military and diplomatic disaster. It led to the establishment of a majority Shia-dominated regime under Prime Minister Nouri al-Maliki, whose disregard for the legitimate aspirations of Iraq’s Sunni minority led to a civil war. Influential sections of the normally secular Iraqi Sunnis, first made common cause with Osama bin Laden’s Al Qaeda and then accorded support, across large tracts of western Iraq, to the Islamic State (IS), under the leadership of Abu Bakr al-Baghdadi.

Interestingly, American forces detained Abu Bakr al-Baghdadi in February 2004 in Baghdad, only to have him released by a Combined Review and Release Board of the US Forces in December 2004, as merely being a “low-level prisoner”. Baghdadi is now the most feared terrorist leader in the world. In seeking to widen his influence beyond Iraqi’s borders, Baghdadi first extended his organisational presence across Iraq’s western borders to Syria. The emergence of the IS in Syria was also thanks to ill-advised American policies, backed by allies like France and UK and leading Sunni Islamic powers — Saudi Arabia, Qatar and Turkey. As its territorial influence spread to Syria, the IS was transformed to ISIL, signalling a quest for combining territorial control in Iraq and Syria, with an intention to extend it across the Levant — to Jordan and Lebanon.

The ill-advised American-backed effort to overthrow the Shia-dominated Assad government in Syria, predictably led to yet another hotbed of Shia-Sunni rivalries. Shia-dominated Iran, Iraq and the Hezbollah from Lebanon, joined the battle against Sunni Syrian insurgents, backed by the US, France, UK, Saudi Arabia, Qatar and Turkey. The ISIL is the third force in this battle, drawing its cadres predominantly from Sunni Arabs of Iraq and Syria and thousands of foreign Sunni fighters from across the world. These foreign fighters have joined what is effectively an exclusively Sunni “jihad” against the rest of the world. The ISIL now has 80,000-1,00,000 members. There are an estimated 20,000 foreign fighters with the ISIL in Iraq and Syria, made up Muslim immigrants from all across Europe, ranging from the UK, France and Germany to Sweden and Italy and even distant Australia, the US and Canada. Sunni Muslims in large numbers from Russia and Central Asia, most Arab countries and Turkey have joined this jihad, threatening stability even in Saudi Arabia, Tunisia and elsewhere.

Unlike other Islamist terrorist outfits, the ISIL skillfully uses social media to influence Muslim immigrant populations in order to recruit and motivate them in Europe and North America to resort to terrorist violence. Muslim immigrants, motivated by ISIL propaganda, organised recent terrorist strikes in Paris and California. Adding to regional tensions, the Western-led ouster of Muammar Gaddafi in Libya has now led to parts of Libya, including in strategic coastal areas, now coming under ISIL control. Moreover, formerly Al Qaeda affiliated groups in Yemen, Nigeria, Niger, Mali and Somalia, have now embraced the leadership of the ISIL. The shooting down of a Russian airliner in Egypt indicated the presence of the ISIL in the heart of the Arab world.

Unlike the Al Qaeda, the ISIL regards Shias as heretics. What also sets the ISIL apart from other terrorist outfits is its utter medievalism. Its excesses include the destruction of pre-Islamic historical monuments, outraging the modesty of non-conformist and non-Muslim women, brutally killing non-Muslims like journalists and other professionals, utilising non-Muslims virtually as slaves and assassinating captured prisoners of war. Those who return from active association with the ISIL in Syria and Iraq become the core of terrorist activities in their countries of residence. Sadly, rather than confronting the terrorist violence of the ISIL unitedly, the entire neighbourhood of Iraq and Syria is being torn apart by regional, sectarian and civilisational rivalries and by rivalries and ambitions of external powers.

Accentuating the regional complexities are the centuries-old rivalries and animosity between the Persians (Iranians) and Arabs led by Saudi Arabia. Superimposed on these civilisational rivalries are lethal Sunni-Shia animosities, extending from Pakistan and the Persian Gulf, to the shores of the Mediterranean Sea. In Syria, we have the astonishing spectacle of the Russians bombing pro-American Sunni rebels, said to be “moderates”, while the Americans and their “moderate” proxies target troops loyal to Bashar al-Assad, a Shia who ran a genuinely secular government. Superimposed on this, is an alliance of pro-American Sunnis led by Saudi Arabia, Turkey and Qatar, which houses the headquarters of the American Central Command. The “Shia Axis” confronting this alliance comprises Iran, Iraq and Lebanon’s Hezbollah. Adding to these complications is the bloodletting in Yemen, where Saudi Arabia’s relentless bombings are aimed at ending all manifestations of Shia Houthi power.

It is evident that there can be no military solution to the Syrian conflict. The Assad regime cannot be easily dislodged from its existing power centres, especially given the backing it now enjoys from Iran and Russia. At the same time, relentless bombings of ISIL positions in Iraq and Syria can degrade, but not destroy, ISIL capabilities. Moreover, as long as the ISIL controls major urban centres like Mosul in Iraq, it will remain a potent force, especially as the opposition to it in Syria is fragmented and divided. Even if the ISIL is pushed out of strongholds in Iraq and Syria, it will move into havens in Libya and elsewhere. It is, therefore, imperative that external and regional powers first negotiate a political settlement in Syria, which will necessarily involve a new federal constitution that respects ethnic and sectarian aspirations in the country.

India is located at some distance away from the epicentre of the present sectarian and civilisational rivalries to its west. Admiration for India’s secularism has grown worldwide from the fact that hardly any Indians have been influenced or motivated by the pernicious ideology and practices of the ISIL. India has also rarely, if ever, been afflicted by serious Shia-Sunni tensions. Moreover, despite the huge popularity of Osama bin Laden across the Islamic world, the Al Qaeda could never muster any support in India. There is no reason to believe that the ISIL will fare differently.