Where does CDS fit in? : The Tribune India

Where does CDS fit in?

The announcement of the four-star rank Chief of Defence Staff (CDS) post is another surgical strike by the government. 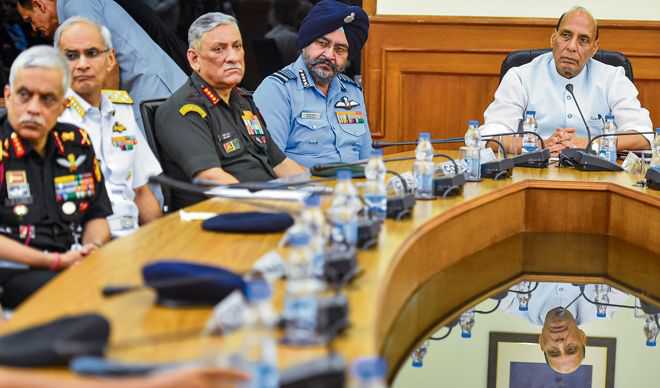 In the lead: The services chiefs would surely not hand over their operational control to the CDS and become administrative managers.

The announcement of the four-star rank Chief of Defence Staff (CDS) post is another surgical strike by the government. While the veterans — from the Army and Navy — have been asking for CDS since 2001, when this recommendation was first articulated in the Group of Ministers (GoM) report headed by Deputy Prime Minister LK Advani, it remained unimplemented for numerous reasons.

The biggest was that the GoM had directed the Cabinet Secretary to make recommendations regarding the relationship of the five-star rank CDS (unlike the present four-star rank) with the civilian officers in the Defence Ministry. The CDS, it was agreed, would be the ‘principal military adviser’ as distinct from the Defence Secretary designated as the ‘principal defence adviser’. The latter, relegated to administrative tasks, would have the following functions: supervision of the department of defence; coordination between various departments of defence; coordinating finalisation of the Long Term Defence Perspective Plan, five-year plan, and the annual budget for approval of the Defence Minister; and advise the minister on matters pertaining to Parliament, Central and state governments, other ministries, etc.

The separation of powers among civil bureaucrats and military offcers, though desirable, was unacceptable to the bureaucracy. Building upon politicians’ fears born out of ignorance, the bureaucracy scuttled it by arguing that too many powers in the hands of the CDS could result in a takeover of the government by the military. Just as the idea of a coup frightened the politicians, within the services, the Air Force resisted the creation of the CDS. It said a CDS from the Army, who knew little about the Air Force’s core competencies, would be unhelpful to the growth of air power, which, given the technological advances, had emerged as a strategic force.

Eighteen years later, the utility of the four-star CDS post appears questionable. The singularly important task of the CDS should be operational — jointness in planning, execution, logistics and training for multi-domain (on land, sea, air, space, electronic and cyber) short, swift and intense state-on-state war.

The government’s identification of terrorism as the main threat has relegated the preparedness for conventional war to second place. With the Army Chief emerging as the main adviser on this threat, the Air Force seeking a foothold in this game after the Balakot attack, and the Navy fretting about coastal vulnerability, what can the CDS do to bring jointness in the non-priority war, especially when the services chiefs would not hand over their operational control to the CDS and become administrative managers?

Second, the creation of the Defence Planning Committee (DPC) under NSA Ajit Doval in 2018 has taken away war preparedness task from the prospective CDS. The DPC would continue to formulate the national security strategy, capability-building plan, manufacturing ecosystem and defence diplomacy. With the services chiefs and Defence Secretary reporting to NSA Doval, he would remain the de facto CDS.

What subjects then would the CDS handle is the third issue. In the GoM report, the CDS was to have a Vice-Chief of Defence Staff (VCDS). Since the CDS did not come about, the post of VCDS was renamed Chief of Integrated Staff to Chairman (CISC) to the Chiefs of Staff Committee (COSC). The CISC came to be known as Chief of Integrated Defence Staff (CIDS). Now that the CDS post has been created, the CISC would likely get its original title of VCDS.

The CISC provides the secretariat for the Defence Ministry headed by the Defence Secretary. Its present tasks — to improve the procurement procedure for efficient utilisation of defence allocations; provide administrative and management support to tri-service Strategic Forces Command, Andaman and Nicobar Command and the soon-to-be-formed defence cyber agency, defence space agency and Special Forces division; prepare doctrines for various operations, etc.,  — will now be the responsibility of the CDS.

Would a four-star CDS have a bigger role than the three-star CIDS in nuclear warfare? It is certain that the command and operational control of nukes would remain with the Cabinet Committee on Security headed by the PM through the NSA. The CDS would perhaps have a better peep than the CIDS on nuclear weapon yields and employment policy. With deterrence shifting to non-nuclear advanced technologies, the role of nukes has been relegated to academic discussions.

The fourth issue concerns the new domains of war: cyber, space and electronic. Unlike major powers like the US, Russia and China, our military does not assess electronic warfare as a separate domain, while cyber and space are considered force multipliers rather than a force by itself. This is because the three services are content with coordination rather than jointness. With the services retaining the control of operations, they are not likely to contribute much to the CDS-headed cyber and space agencies.

The usefulness of the four-star CDS would perhaps be in the COSC meeting where issues concerning soldiers and veteran welfare and ceremonial matters would be handled with firmness.

Given this, creation of the diluted office of the CDS does not serve the purpose it was intended to do. Apologists, however, will applaud the CDS as work in progress.