Who will hunt the witch-hunter? : The Tribune India

Who will hunt the witch-hunter?

The stories of Mayong, the black magic capital of India, are part of any child's growing up in Assam. 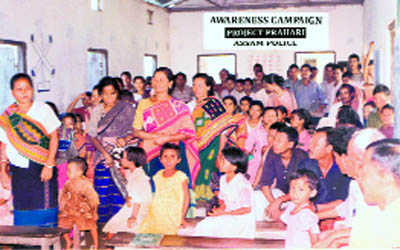 An awareness camp against witch-hunting organised by Project Prahariat Kokrajhar

The stories of Mayong, the black magic capital of India, are part of any child's growing up in Assam. At least for those of my generation. Every evening, during load-shedding hours, a regular feature in Guwahati in the 1980s, we heard these stories from an uncle, posted in Mayong. Even historically, we had enough reason to take pride in Mayong and its legacy. When Aurangzeb ordered Raja Ram Singh to suppress the Ahoms in 1667, the Mughal General was more afraid of black magic than the enemy’s army. He was lucky enough to survive but not to win.

As cynicism robbed innocence, Mayong lost its appeal but witch-hunting, a harsh reality, which was not part of our childhood fantasy, stares us in the face.

When Eagles sang the song, “Witchy Woman”, they described her as a seductive woman with raven hair, ruby lips and with the moon in the eyes. But 63-year-old Purni Ornag in Sonitpur district had none of these attributes as she tried to outrun the frenzied mob on her trail recently. Her eyes only reflected the fear of death. Who can forget the ghastly incident in which 38 people of Shikarigaon, a remote village in Majuli Island, were branded as witches and ostracised by their fellow villagers last year? Or, for that matter, the incident in October last year when Indian athlete Debojani Bora was severely beaten up after being branded a witch in Assam? Witch-hunting has officially claimed 130 lives in Assam since 2002. The cultural belief is so well-entrenched in the entire community that when a woman is killed in the name of witch-hunting, nobody is even willing to report the incident to the law-enforcement authority, leave alone be a witness. In most cases, when the police comes to know about it, it is too late. The practice is prevalent among the Bodos and the tea tribes and Kokrajhar is one of the worst-hit districts.

Most incidents of witch-hunting have been reported from the rural areas of Assam. And the reasons are not hard to guess — illiteracy and lack of medical and civic amenities. The local Bez or Ojha (witch doctor) is the one who holds the final authority on health issues. When the matter gets out of hand, he identifies a dayan (witch) to blame for such ailments. A team of Project Prahari had once conducted a blood test in a remote village in Kokrajhar. Most blood samples of children showed latent malaria, which gets aggravated during the rainy season. Quacks are not well-equipped to handle such ailments. The accusing finger is often pointed at any single woman residing in the village.

A woman branded as a witch is subjected to numerous forms of torture — beating, burning, paraded naked through the village, forced to eat human excrement and raped. In some cases her hair is cut off and she is supposedly “defanged”. In some instances her nose or other body-parts are cut off. She and her children are socially ostracised, her land and property seized. Most single women accused of practising witchcraft are either embroiled in some property dispute or had refused to yield to sexual advances  of an influential person. Interestingly, when a family becomes upwardly mobile, because of education or any other reason, it upsets the power dynamics in the village and it becomes the target of the community.

Geetarani Bhattacharya, the state programme director of Assam Mohita Samata Society, an activist for a decade, has handled more than 80 cases. She believes politicalisation of witch-hunting is a trend these days. Earlier, people used to blame witches for calamities like prolonged sickness or crop failure. Now-a-days they use personal vendetta to victimise someone by declaring him or her a witch. A shocking incident of killing of five people in 2000, allegedly indulging in witchcraft, motivated Kuladhar Saikia, the then DIG Kokrajhar, to act. Witch-hunting is a worldwide phenomenon but witch-hunting in Assam has been thriving mainly because of lack of education, medical facilities and, of course, social and economic empowerment as far as women are concerned. Parameters which Saikia thought could be tackled if a common platform was built involving NGOs, women activists, administrative heads and, of course, the law-enforcement machinery. His brainchild, Project Prahari, came into being in 2001 in village Thaigarguri in Kokrajhar. It is now the Assam Police's pet project and embraces as many as 60 villages of the state. Activists under this banner have been creating awareness against such practices in rural areas and also trying to educate people in general and empower women in particular. Following the footsteps of Jharkhand, Bihar, Odisha and Maharashtra, which have special laws to deal with witchcraft, the Assam Government has drafted a Bill titled, “Prevention and Protection from Witch Hunting Bill 2015”. The draft Bill has been prepared at the instruction of the Gauhati High Court, which has asked the state to initiate the process on the basis of a city-based lawyer Rajib Kalita’s PIL in 2013, seeking formulation of an anti-witch hunt law.

The Bill proposes punishment from three years to life imprisonment. Apart from proposing stricter punishment for terming someone a witch and for physical, sexual or mental torture leading to suicide and displacement, the proposed legislation aims to check illegal practices of quacks. The Bill also proposes action against negligence in investigation, formation of special courts for trial of witch-hunting cases and free legal aid to victims. The Bill is likely to be tabled during the forthcoming monsoon session of the Assam Legislative Assembly. While prevention and protection of so-called witches will curb this practice, Geetarani feels rehabilitation provisions should be emphasised, including compensation for the victims. She defines witch-hunting as a gender-based violence as 98 per cent victims are women. The law should take into account the collateral damage and compensate a person who is declared a witch. With a law on the anvil and various factions joining hands to fight this tradition which is nothing but using old superstitions to satiate material desires, hopefully the day is not far when the moon will replace the fear in her eyes.