The judgment by a Constitutional Bench of the Supreme Court, led by Justice JS Khehar, on Arunachal Pradesh is not just an indictment of Governor J. 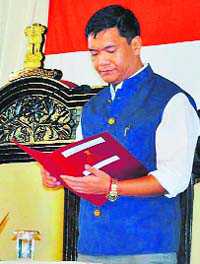 Pema Khandu being sworn-in as the Chief Minister, Arunachal Pradesh, at Itanagar. PTI

The  judgment by a Constitutional Bench of the Supreme Court, led by Justice JS Khehar, on Arunachal Pradesh is not just an indictment of Governor J.P. Rajkhowa but a fit case for the withdrawal of presidential "pleasure" if we really believe in the Constitution as our "only holy book" and constitutional morality has any relevance in our polity. What more is required to remove a governor than an observation by the highest court that his actions gave a "thrashing to the Constitution,"  "spanking to governance", "were not only opposed to a rule of law but also opposed to the rule of law" and were "arbitrary." One is surprised to see that there is not even a whisper about  his resignation or removal. Does retention of the governor's office, particularly a nominated one, show the hypocrisy of our leadership? Why do governors behave like the agents of the Centre? What are the reforms that are to be introduced in the appointment of governors?

The governor's office has been there since antiquity. Most governors, in ancient and medieval times, rather than preserve the unity of the country revolted against their emperors. British governors, however, proved to be the most loyal servants of the imperial government and Indian governors have preferred to follow the path of their immediate predecessors. In 1937, when the Congress won elections in seven provinces, it took office on the condition that the British governors would not interfere in the functioning of its ministries and would refrain from exercising "discretion and special powers". But subsequently we conferred very same special powers on them.

The office of governor today signifies broad daylight robbery of federalism at its best and constitutional dictatorship at its worst. In the good old days, the best governor used to be one “who has a broken leg and stays at home”. This was the idea under which the governor had a faint presence, like a full moon on a midday. His primary role as sagacious counsellor was "to be consulted, to warn and to encourage". But this was in the early days of the Republic, when following the British conventions the head of the state was supposed to sign his own death warrant if the same is presented to him by the cabinet. Raj Khowa paid no heed to these ideals and ignored the cabinet's advice even in summoning the assembly and on his own fixed its agenda. The court found this as unconstitutional. Today governor's office is full of activity with politics of worst type being played there, especially if the chief minister belongs to a party other than BJP.

In spite of our opposition to the office of the governor during the days of the Raj, it was retained by the framers of the Constitution to preserve the unity, stability and security of the country. Nehru favoured the appointment of eminent academicians from outside politics and outstanding people from other walks of life as governors. Initially, B.N. Rau, the constitutional advisor had proposed that the governor would be elected by the legislative assembly.  The Provincial Constitution Committee, under the chairmanship of Sardar Patel, had recommended that the governor should be elected by the people of the state with a term of four years and only be impeached for “misbehaviour”. Jayaprakash Narayan wanted the governor's appointment to be made by the President, out of a panel of four persons selected by the assembly and Members of Parliament of the concerned state.

Decades later, the Sarkaria Commission recommended a similar thing and said the Vice-President and the Speaker of Lok Sabha should also be consulted. But the worst thing to have happened to this office is the fact that the governor is the only constitutional authority without any security of tenure like the President, judges, CAG, Chairman UPSC, Election Commissioner, CIC etc. He is worse off than an IAS officer, who unlike the governor, is entitled to proper inquiry and whose services cannot be terminated without a definite finding of  “misconduct”. But a governor remains in office only so long he enjoys the “pleasure of the President,” which in reality means the pleasure of the political dispensation in Delhi and he can be removed on the whims and fancies of the Prime Minister. This, in spite of the Supreme Court’s decision in the Raghukul Tilak case when the court held that the governor is not an employee of the central government. He is neither under its control nor accountable to it and holds an independent constitutional office. The governor is neither a decorative emblem nor a glorified cipher. His powers are limited but he has an important constitutional role to play in the governance of the state and in strengthening federalism. He must remain true to his oath of “preserving, protecting and defending the Constitution”. Unfortunately, today Raj Bhavans have become a rehabilitation home for the “burnt out” or “inconvenient” leaders of the ruling party. Alternatively, retired bureaucrats are rewarded for their loyalty. Sometime back, as many as six retired IPS officers who had served in CBI, IB etc. were made governors. Let the Prime Minister restore the prestige and dignity of this office as he had himself suffered at the hands of the Congress-appointed governor in Gujarat.

The writer is Vice-Chancellor of NALSAR Law University, Hyderabad.