Why we should remember Balraj Sahni

BALRAJ Sahni has remained a ghostly figure in the history of Indian cinema. 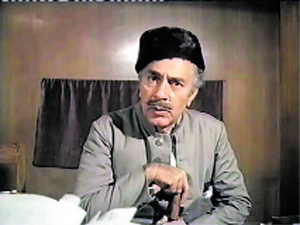 BALRAJ Sahni has remained a ghostly figure in the history of Indian cinema. This is because he was for most of the time away from the gossip circuit. He hardly gave any personalised interviews and there was no publicist who promoted him to producers. He found work from those who belonged to the theatre movement in the country and from friends who respected his talent.

He is remembered best today for his last film, Garam Hawa. But his innings in cinema have been long and meritorious. Balraj was not his original name. His parents named him Yudhishthir and the name remained until he went to school. His ancestral home was in Amritsar, where he spent his early years with his brother Bhisham, and his sister. Balraj was a studious child and studied long for his first postgraduate degree in English from the Panjab University, Lahore. He followed this with a graduation course in Hindi and moved up to get another postgraduate degree in Hindi. In 1936 the "over educated" Balraj married  Damyanti, and moved to Shantiniketan to work as a teacher in both English and Hindi.

In 1938, Balraj was noticed by Mahatma Gandhi who asked him to join his secretariat. In 1939, Gandhiji recommended him for a job in the BBC in London in the Hindi language broadcast  section. He sailed from Bombay and joined his new duties just before things became less certain in Europe and England. When War broke out in 1939,  Balraj was telling his Indian listeners in India on the rise of Hitler in Germany and his  campaigns.

It was while he was a staff broadcaster in BBC, that he was joined by  another woman broadcaster, the daughter of wealthy parents and a bohemian. She had moved out of her parents’ home early in life to roam the world becoming a failed actress, a better pamphleteer and a well-respected film editor. That was Marie Seton.Within BBC, the erudite Balraj caught Marie's attention, and she invited him to meet her friends. The only thing that interested Balraj was her film connection, and Marie obliged. She introduced to Balraj Sahni the world of Soviet Cinema and the works of the film maker S. Eisenstein. There was also more European cinema, which  Balraj saw. The more he saw the cinema of cause, Balraj was hooked in his search to study the works of Marx and Engels. Between 1941 and 1943, he was transformed into a committed communist worker and returned to India in the end of 1943. He joined the Indian People Theatre Association (IPTA) as a regular worker and  a card holder of the CPI.

Through IPTA, Sahni entered the circle of Leftist thinkers, writers and artists and became an associate of Khwaja Ahmad Abbas, Munshi Prem Chand, Salil Chowdhury, Tripti Mitra, Badal Sircar and others.  He acted in plays created by IPTA members, but found he had limited audiences for the messages that were important. IPTA also started making feature films. The first IPTA production, Insaaf, in which Balraj performed failed. IPTA moved to Calcutta for the next production and made Dharti Ke Lal in1946. The film was directed by K.A. Abbas and  narrated the real story behind the Great Famine of Bengal in which more than one million poor people died of hunger.

In 1947, Balraj lost his wife Damyanti to death. It was the first big loss that he suffered. His relatives suggested he remarry for the sake of his small children and he married one of his cousins, Santosh Chandhok. But Balraj did not forget the famine. He became more determined to use the medium of cinema to move further into the masses and kept  a minimum time devoted to working amidst labour and peasants.  During the shooting of the film Dharti ke Lal, Balraj Sahni came to know more leftist artists working in Calcutta. His associates in IPTA were equally involved in theatre and pamphleteering and Balraj eked out a small living from these activities.

In 1952, when the first International Film Festival was  organised,  Balraj was also present in many of these film shows. Some of the film themes fortified his resolve to engage with meaningful cinema.  Salil Chowdhury, also from the IPTA repertoire,  wrote a short story and Balraj was asked to play the main role of a farmer who had to abandon his fields due to poverty and move to Calcutta to work as a rickshaw-puller. The film was Do Bigha Zameen.

Balraj practised for a whole week to perfect the style of pulling the rickshaw properly and in the crucial scene he  also got injured. This film rode to a silver jubilee run, and won  at the state awards. It was shown in 1955 to Marshall Stalin  in Moscow, who was less impressed and called the film, “a pseudo-socialist documentary”. The remark hurt Balraj who expected a more sympathetic observation from his communist icon.

The 1950s saw  Balraj portraying  varied roles. He was associated with some silver jubilee or important films, like Seema (1954), Aulad (1954) Pardesi (1957), Sone ki Chidiya, Kathputli (1958), Choti behan and Satta Bazaar (1959). Pardesi, an Indo-Soviet film production anchored by K.A. Abbas, despite being in  colour and cinemascope, failed to impress the Indian audiences but had a good commercial run in Soviet Russia.

He wrote a series of books in Punjabi. Mera Pakistani Safarnama and Mera Russia Safarnama are considered good writing. Balraj also took to directing IPTA plays and his most successful directional work was Zubaida. He also attempted a film as director in Lal Batti, which was  a failed venture. However, writing  of the screenplay of film Baazi,  directed by Guru Dutt, brought him prominence. Balraj was interested in improving the working conditions of the labour involved in film studios. He took issues with the government  on matters that agitated him.  He also suffered imprisonment for his Leftist views.

During the post Sino-Indian war, Balraj found himself in a dissenting position to that of the the CPI on the war. He accepted   a role in Haqeeqat (1963-64), which depicted a pro-India position and his leftist colleagues resented his  participation. When Jawaharlal Nehru died, Balraj was vocal in his praise for Nehru's contribution to nation building. Balraj was criticised for this praise within IPTA. Balraj continued to be associated with meaningful cinema from Bombay, but he was not much in demand for commercial films.

He remained dependent on the goodwill of his leftist friends for his livelihood. As we look back on his film career, we find that he is present in most of important films of the era. In 1969, the actor was given the Padma Shri, the only official award. However, popular awards still eluded Balraj.

In 1970, he worked with P.K. Vasudevan Nair to create a new Leftist youth organisation, the All-India Youth Federation, the youth wing of the CPI, with him as its first president. In 1972, he was invited by the student's union of Jawaharlal Nehru University, a leftist stronghold, to address the annual student's convocation. His speech is considered a landmark event in the University's campus politics.

The decade of the 1960s was most the fruitful for him and he played character roles. Big and small films like Waqt, Ek Phool Do Maali, Ghar Sansaar, Hindustan Ki Kasam, Pavitra Paapi, Aman, Naunihal, Aaye Din Bahaar Ke, and two Punjabi films — Satluj De Kande and Nanak Dhukhiya Sab Sansaar. Anuradha, Kabuliwala and Garam Hawa are Indian cinema’s top-of-the shelf classics. He acted in a total of 93 films, including two which were released after his untimely death. As work in cinema tapered off, Balraj also took a backseat in life.

He died of a broken heart

Following the India-Pakistan War of 1972, he took the vocal political position & endorsed Indira Gandhi's waging a war against Pakistan to liberate East Pakistan. The CPI strongly disapproved of this and felt Balraj was not a faithful and loyal member of the Communist Party of India. A resolution was passed to throw him out. The job to inform Balraj that he was no more a member of the CPI, was given to some of his closest friends in Bombay. They came to him and handed over the copy of the resolution. He had recently suffered an emotional setback due to the untimely death of his daughter, Shabnam. He suffered a massive heart attack from the compounded stress. As he lay on his deathbed, Balraj asked his wife to get a copy of Das Kapital, the communist movement's bible and put it beside his pillow. The same night, Balraj died of a broken heart!

The writer is a veteran film historian