ISLAMABAD: The revamped Gwadar port, a strategic deep seaport in the $46 billion China-Pakistan Economic Corridor (CPEC), today became operational in Pakistan’s restive Balochistan after a Chinese commercial ship laden with around 250 containers set off for the Middle East and Africa. 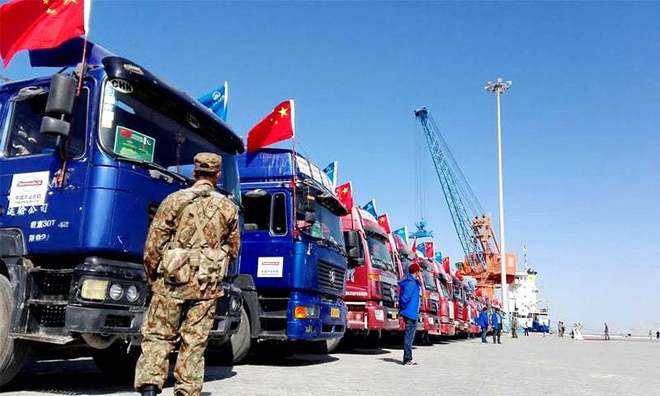 A Chinese convoy that arrived at Gwadar on Saturday. courtesy: Dawn

The revamped Gwadar port, a strategic deep seaport in the $46 billion China-Pakistan Economic Corridor (CPEC), today became operational in Pakistan’s restive Balochistan after a Chinese commercial ship laden with around 250 containers set off for the Middle East and Africa.

Prime Minister Nawaz Sharif inaugurated the start of operational activities at the coastal town of Gwadar in southwestern Balochistan province, which saw an IS suicide bombing claim as many as 52 lives.

With the operationalisation of the revamped Gwadar port, the multibillion dollar CPEC, linking western China to the Arabian Sea, became a reality. The corridor is being laid through the Pakistan-occupied Kashmir (PoK), sparking concerns from India.

In his address, Sharif called the development as a “watershed” moment in the history of Pakistan and the entire region. He called it a symbol of Pakistan’s commitment to China’s one belt-one road initiative, of which the CPEC is a key port.

“We will leave no stone unturned in ensuring that the CPEC and all projects under its umbrella are materialised within the given time,” he said.

Sharif also commented on the one belt-one road initiative by China and said it integrates with Pakistan’s Vision 2025 which seeks to transform the country into a hub of trade and commerce.

He said CPEC would ultimately integrate South Asia, China and Central Asia, and offer opportunities for people in this region besides giving opportunities to investors from across the world.

Officials said a major trade convoy that started from Kashgar in western China on October 30 yesterday reached Gwadar, where Chinese vessels were ready to take the shipment of Chinese goods to Middle East and African countries.

“This is the first time that a trade convoy successfully passed through the western part of Pakistan from the north to the south. It proves the connectivity of the local roads and the realisation of the concept of one corridor with multiple passages,” Chinese ambassador Sun Weidong said at the inauguration ceremony. He said it was the first time that the Gwadar port was exporting Chinese containers to overseas destinations.

Chinese ships currently use the Strait of Malacca, a narrow passage between the Malay Peninsula and Indonesia, and the new route gives China access to the Persian Gulf region and the Middle East. — PTI