SRINAGAR: The total absence of tourists notwithstanding, the authorities in Kashmir have resumed the de-weeding operations to clear the water of the Dal Lake in Srinagar, a favourite spot with the tourists and visitors to Kashmir. 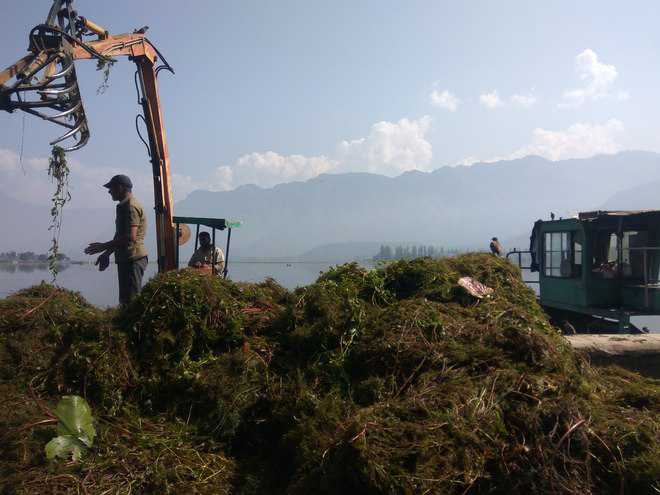 De-weeding work being carried out at Dal Lake in Srinagar.

The total absence of tourists notwithstanding, the authorities in Kashmir have resumed the de-weeding operations to clear the water of the Dal Lake in Srinagar, a favourite spot with the tourists and visitors to Kashmir.

“Initially, the de-weeding operations were affected for some time, but later on the operations resumed and as you can see yourself, a majority of the weeds that had sprouted above the water has been removed,” an operator with the Lakes and Waterways Development Authority, which manages these operations and is responsible for the upkeep of the lake, said.

An idle shikara owner pointed out that for the initial days when the whole region was put under restrictions following the abrogation of Article 370 and the downgrade of the state into two union territories, the de-weeding and other operations inside the Dal Lake were stopped.

Besides, LAWDA has deployed trucks which carry weeds to the dumping site at Nishat, the operator who identified himself as Ghulam Rasool, said.

“But now the machines are back in operation and the condition looks improved. But due to the prevailing situation, no tourist is visiting the place to take a ride on the lake waters,” a boatman, who identified himself as Mehrajuddin, said.