SHIMLA: Senior BJP leader and former minister Kalraj Mishra has been appointed as the new Governor, while incumbent Acharya Devvrat has been transferred to Gujarat. 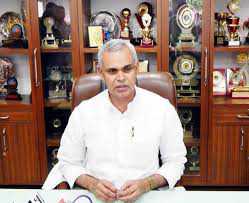 Senior BJP leader and former minister Kalraj Mishra has been appointed as the new Governor, while incumbent Acharya Devvrat has been transferred to Gujarat.

He also remained the in-charge of organisational affairs for Himachal for two years and was elected to Lok Sabha from the Deoria constituency in Uttar Pradesh in 2014 and elected to Rajya Sabha thrice in 1978, 2001 and 2006. He was a Cabinet Minister in the Uttar Pradesh Government from March 1997 to August 2000, holding the portfolios of Public Works, Medical Education and Tourism. Acharya, who occupied the centre stage with his zero-budget natural farming, has been shifted to the home state of Modi.

Out of the 18 regular Governors, who adorned the Raj Bhawan since January 25,1971, when Himachal was granted statehood, 15 did not complete their term and were either shifted, removed or resigned. Devvrat is the 15th Governor to leave the Raj Bhawan before the completion of his term.