TORONTO: Controversy has surfaced in Canadian politics, with the leader of a prominent social democratic party being found to have close links with a Canadian Sikh rapper known for promoting the need for Khalistan. 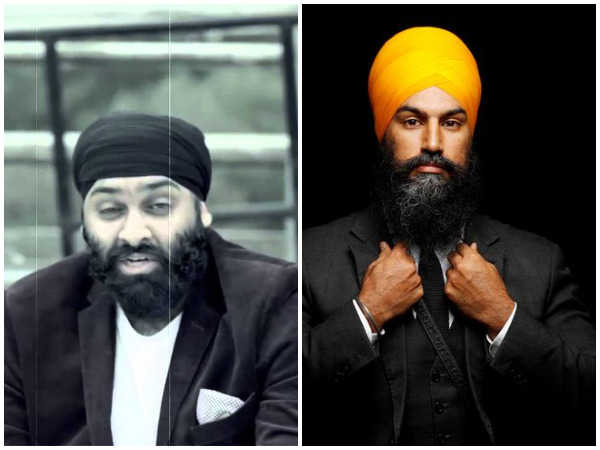 Controversy has surfaced in Canadian politics again, with the leader of a prominent social democratic party, the New Democratic Party (NDP), being found to have close links with a Canadian Sikh rapper known for promoting the need for "Khalistan", or an independent homeland for Sikhs.

According to a report published in the website of the daily Toronto Sun, NDP leader Jagmeet Singh has personal ties with Canadian Sikh rapper Chani Natt, who is known to glorify violence and promote an independent state of Khalistan.

Here is Natt with his crew of gun-wielding thugs waiving a Khalistani independence flag. The Vancouver Canucks jersey is a nice touch, reminds us this is happening in our own backyard.pic.twitter.com/q1pmMekNgJ

The daily suggests that Natt is a close personal friend of NDP leader Jagmeet Singh, and had even posted a photograph of both together on Instagram on February 8, 2017.

The Instagram caption read as follows: “Looked up to this guy for a while!! Never thought we would become friends one day and hang out. It's an honour to have him as a brother.”

Another photo of Singh and Natt, posted on July 6, 2017, includes the caption “full support”.

Neither Singh nor Natt have responded to questions from the Toronto Sun.

According to the Toronto Sun, Natt has a large following on social media and his YouTube videos, which often depict violence and terrorism, have allegedly been viewed millions of times.

For instance, his song 'ROOSE' features images of men carrying military equipment, including an assortment of guns and bullets, wearing black turbans, dark sun glasses and T-shirts that read: “INDIA'S MOST WANTED.”

The Toronto Sun web site further states that these men are seen waving a flag of the erstwhile Soviet Union and the yellow Khalistani independence flag. Interlaced with the modern images of Natt and his gun-wielding gang, the web site also reveals that there are historic images that glorify the Sikh militants who were active during the 1984 anti-Sikh riots in India.

The YouTube description reads, “Dedicated to the Shaheeds (martyrs) of the Sikh nation,” the daily reports, adding that this video has been viewed over 1.3 million times.

The video shows Natt among other heavily armed men, as well as historic footage of armed Sikh militants in India. The historic footage also shows an actor firing a gun at a photo of the first woman Prime Minister of India, Indira Gandhi, who was assassinated by her Sikh bodyguards on October 31, 1984.

Natt's large Canadian following and his open celebration of Khalistani war and terrorism, flies in the face of claims made by Sikh activists.

It may be recalled that last month, controversy dogged Canadian Prime Minister Justin Trudeau's week-long visit to India, when his government is alleged to have invited a Khalistani sympathizer and former terrorist Jaspal Atwal to a dinner in Delhi.

At that time, the World Sikh Organisation had controversially tweeted, "There are no current examples of 'Sikh extremism' in Canada."

Addressing media last month, Trudeau had said then, "Obviously we take this situation extremely seriously. As soon as we found out, we rescinded the invitation immediately."

He said the MP from his party "took full responsibility" for the dinner invitation.

Atwal, now a businessman in the Canadian city of Surrey, claimed that he had travelled to India separately and was not part of the Canadian delegation. Indian officials had then said they were investigating how Atwal was granted a visa.

Atwal told Canada's Postmedia network that he had no plans of attending the dinner, which was being hosted by Canada's High Commissioner to India, N Patel, and that he was visiting Mumbai for business.

Atwal, it may be recalled, was convicted along with three others for shooting an Indian minister Malkiat Singh Sidhu while he was in Vancouver on a personal visit. The minister was hit twice but survived the attack. He was, however, assassinated in India in 1991. All four convictions were later overturned on appeal. ANI

On September 15, SC had grants him protection from arrest ti...