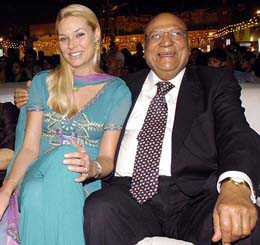 Leading British Indian entrepreneur and parliamentarian Lord Swraj Paul has announced 1 million pounds donation to the London Zoo for a major new project that will lead to creation of the Angad Paul African Reserve in memory of his late son.

The Caparo Group chief, who has donated substantially over his long association with the zoo, said the latest donation would go towards the redevelopment of its aviary and the surrounding area.

“I have now decided to give 1 million pounds to the zoo for its next major project, the redevelopment of the Snowden Aviary and the surrounding area, which will be called the Angad Paul African Reserve,” said Lord Paul, during his annual gathering held at the London Zoo on Sunday.

“Dominic Jermey, the Director General, and the team are working very hard to open it next year,” said the 88-year-old India-born industrialist.

The redesign of the Zoological Society of London (ZSL) aviary, being undertaken by celebrated British architect Norman Foster, is set to transform the aviary conceived by renowned British photographer Lord Snowden many years ago into a walk-through enclosure.

Earlier, Lord Paul had stepped in to save the London Zoo from bankruptcy back in 1993 with a 1 million pounds donation to fund a new children’ s zoo section in memory of his late daughter Ambika’s love for the place. He has since been a consistent supporter of the popular tourist spot in London, where later Angad got married to his wife Michelle in 2005.

Lord Paul said: “In her last days, Ambika got much happiness from visiting this zoo and sharing its ambience. This is why a part of the zoo is appropriately named the Ambika Paul Children’s Zoo and has a special place in our hearts.”

“In my view, the zoo is the best place for parents and children to enjoy being with each other. Over my 30-year association, I have enjoyed coming with my children, including holding Angad’s wedding here.”

Paul was recently also awarded an Honorary Fellowship of ZSL for his “transformational gifts” towards the many projects undertaken by the society and in recognition of his work to “inspire, empower and inform people about wildlife and conservation”.

“This latest magnificent gift to the zoo is a tribute to both his daughter Ambika and son Angad and marks 25 years of hospitality and generosity and bringing people together from all over the world to be here at the zoo,” said former British prime minister Gordon Brown, a close friend of Lord Paul.

“There would be no zoo here today were it not for the fact that Swraj kept this zoo going in difficult times,” he noted.

Ambika Paul was born in Kolkata in 1963 and died of leukaemia at just four years old in April 1968 after her family moved to the UK. Her brother, Angad Paul, who is credited with taking the Caparo Group into India, died suddenly in 2015 aged 45. PTI