JALANDHAR: The victory of Paul Manly of the Green Party in the Nanaimo-Ladysmith riding federal by-election in the Vancouver Island — securing second seat for the Green Party in the House of Commons set the alarm bells ringing for both—New Democratic Party (NDP) chief Jagmeet Singh and his archrival Prime Minister Justin Trudeau. 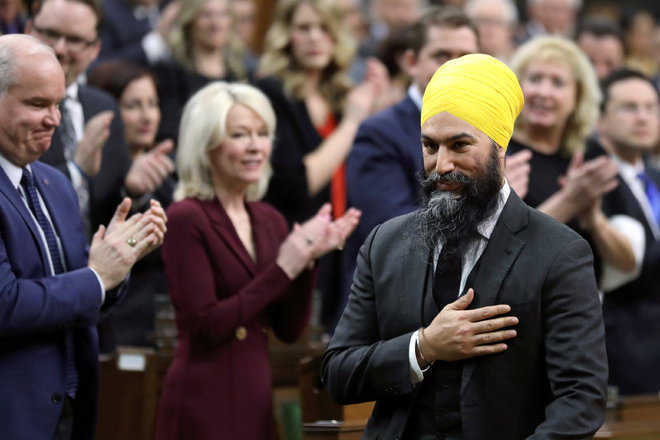 The victory of Paul Manly of the Green Party in the Nanaimo-Ladysmith riding federal by-election in the Vancouver Island — securing second seat for the Green Party in the House of Commons set the alarm bells ringing for both—New Democratic Party (NDP) chief Jagmeet Singh and his archrival Prime Minister Justin Trudeau.

Manly has created a history of sorts in the Monday federal by-election in Nanaimo-Ladysmith by securing 37.3 per cent votes while John Hirst of the Conservative Party finished second by cornering 24.8 per cent votes.

Bob Chamberlin of the NDP could manage just 23.1 per cent votes followed by Michelle Corfield of the Liberal Party at 11 per cent and Jennifer Clarke of the People’s Party at 3.1 per cent.

The voter turnout in Nanaimo-Ladysmith poll was 41 per cent way above average 31 per cent polling.

Manly was the second Green Party nominee elected for any federal seat after Elizabeth May who was the sole party MP in the House of Commons since 2011.

What has triggered ‘fear psychosis’ amongst the NDP top brass and the Liberals’ leadership was that the Green Party secured victory at a crucial time when Canada was set to go for federal polls within a short period of about six months on October 21.

While the Nanaimo-Ladysmith has never been a ‘cup of tea’ for the Liberals for the party had not won the seat even once since 1940, the victory of the Green Party in the island has hit NDP leader Jagmeet Singh hard.

The reason was the area has been an NDP core stronghold and had won 18 of the 22 previous elections since 1953.

With the loss of Nanaimo-Ladysmith, the NDP has lost its vote share in 11 of the 12 bypolls held under Jagmeet Singh’s baton as the NDP Canada president.

It was a different matter that Singh had gained some of the lost ground by ensuring his personal victory in the Burnaby South of the BC in February.

If the trend set by the Nanaimo-Ladysmith voters continues, the NDP could lose five seats still in the Vancouver Island. And Singh would not want it at any cost at a time when his leadership was under ‘duress’ and was challenged quite often from within.

The victory of Paul Manly has also indicated that Canadian voters were increasingly getting conscious about climate change and the ‘political courage’ required to tackle the emerging situation.

The Green Party has hailed its victory as “heralding of a new era in Canadian federal politics” and has thanked the voters for their “bravery” and “political courage” for initiating the “real change”.

Manly who had cornered a 20 per cent vote share in 2015 in Nanaimo-Ladysmith has said his victory indicated that the Canadians were ready for a “different” genre of politics. He attributed his victory to his party’s poll plank based on issues like climate change, camps for the homeless and affordable housing for people.