Pro-Khalistan Sikhs and Pakistanis hold protest outside UN over Kashmir

NEW YORK: Pro-Khalistan Sikhs joined by some Pakistanis held a protest outside the UN demanding the restoration of Kashmir’s special status. About 400 people took out a march. 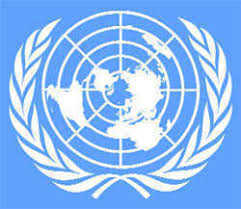 Most of the participants were Sikhs, with a few Pakistanis and Kashmiris.

Pro-Khalistan Sikhs joined by some Pakistanis held a protest outside the UN demanding the restoration of Kashmir’s special status.

About 400 people marched from India’s UN mission to a cordoned-off area opposite the UN on Thursday, India’s Independence Day. They shouted slogans for Khalistan and Kashmir, holding flags of Pakistan-occupied Kashmir and yellow Khalistani and blue “referendum” banners.

Most of the participants were Sikhs, with a few Pakistanis and Kashmiris.

A diplomat from Pakistan’s UN Mission was seen moving in their midst taking pictures of the demonstration.

The organisers billed it as a protest by “Kashmiris and pro-Khalistan Sikhs” with the support of “local Sikh temples”.

Gurpatwant Pannun of Sikhs for Justice, who was the main organiser, said they shared a common cause with Kashmiris. He said his organisation was organising a “referendum” on Khalistan next year.

Pannun said they had presented to a UN Human Rights official a memorandum addressed to Secretary-General Antonio Guterres’s spokesperson, asking for deployment of UN peacekeepers in Kashmir and holding a plebiscite there, as well as recognising his group’s Khalistan “referendum”.

Kuldip Singh Dhillon, president of the Sikh Cultural Society of New York, which runs the biggest gurdwara in the city, said his organisation supported the demand for returning to status quo in Kashmir and asserted that they had a common cause with Kashmiris. IANS