Difficult to vie with the best, but I was confident: Fencing medallist

JAMMU: Ace fencer of J&K Shreya Gupta, who has brought laurels to the state by winning a bronze medal at the sabre event in the ongoing Commonwealth Cadet and Junior Fencing Championship at Newcastle, England, said she was always hopeful of a good performance. 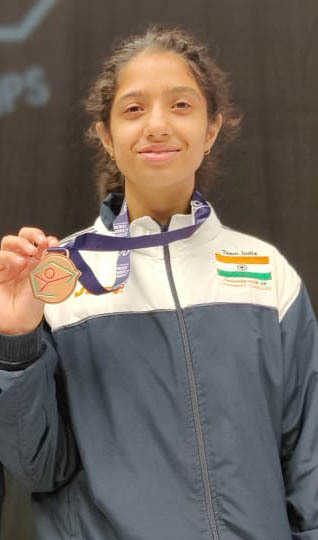 Shreya Gupta has won a bronze medal at a fencing championship in England.

Ace fencer of J&K Shreya Gupta, who has brought laurels to the state by winning a bronze medal at the sabre event in the ongoing Commonwealth Cadet and Junior Fencing Championship at Newcastle, England, said she was always hopeful of a good performance.

“Before the championship began, I had full faith in my preparation for this prestigious international championship but it is always difficult to compete with the best in the business. I am glad that I managed to win a medal for my country,” an elated Shreya told The Tribune on telephone.

A Class IX student of Presentation Convent Senior Secondary School, Gandhi Nagar, Shreya said she would continue to work hard in future to make the state proud. “Right now, my focus is on the upcoming nationals which are slated to be held in Odisha. If I perform well, I may get a chance to represent the country once again in the Asian championship,” she said.

Shreya had represented India in the Asian Cadet Championship which was held in Dubai from February 23 to 26. Further, she was also declared the best national fencer of the championship for her outstanding performance. After securing the top spot in the selection trials held in Maharashtra, Shreya underwent a two-month training camp at Aurangabad before leaving for the commonwealth championship. — TNS