CHANDIGARH:For Prakash M Nadar (39) disability is no hurdle for doing good for society. 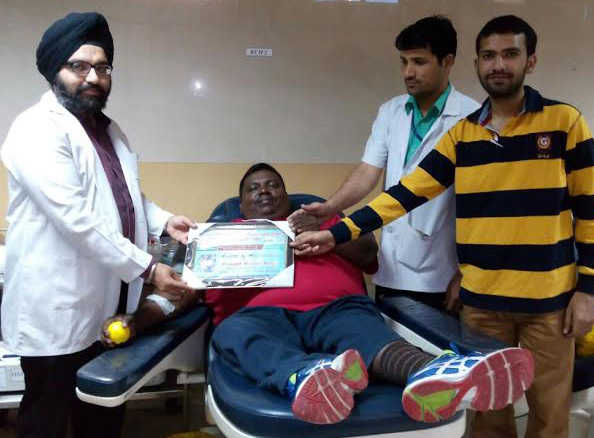 For Prakash M Nadar (39) disability is no hurdle for doing good for society.

Prakash, who is 90 percent physically disabled and belongs to Mumbai, donated blood for the 77th time at the PGI today.

Prakash M Nadar was afflicted by polio during childhood. He did not let his disabilities come in his way and decided to help those in need of blood with the support of the Federation of Indian Blood Donors Organisations (FIBDO). Soon after landing in Chandigarh today, he drove directly to the PGI from the airport and donated blood.

Nadar has come to the city to participate in the 16th Senior National Para Athletics Championship, which began at Panchkula today. Born in a middle-class family and struck by polio at an early age, Nadar overcame all hurdles to attend a special school,  Society for Education for the Crippled, in Agripada, South Mumbai.

After Nadar’s father died for want of blood, donating blood became his mission. This spurred Nadar to join an NGO and spread awareness on importance of donating blood. He organised blood donation camps and took the lead by donating blood every three months, as stipulated under the law.

In this quest, he has been regularly donating blood for the past 22 years.

He donated blood for the76th time at the Sree Chitra Tirunal Institute of Medical Sciences and Technology, Thiruvananthapuram in Kerala.

“I donate blood four times a year and now, I am trying to so in each state so that people become aware of the importance of blood donation.

Chandigarh is the 11th state/UT where I have donated blood today and will cover all Indian states in the next few years,” Nadar told The Tribune.

He said that If a person like him who was 90 percent disabled could donate blood, why could n’t all healthy people of India do so. It would save many precious lives, he said.