12 dead, 39 injured as bus falls into gorge in Himachal

SHIMLA: Twelve persons were killed and 39 others were injured when a Himachal Road Transport Corporation bus plunged into a deep gorge near Galu village, some 10 km from here, in Mandi district at 8 pm last night. 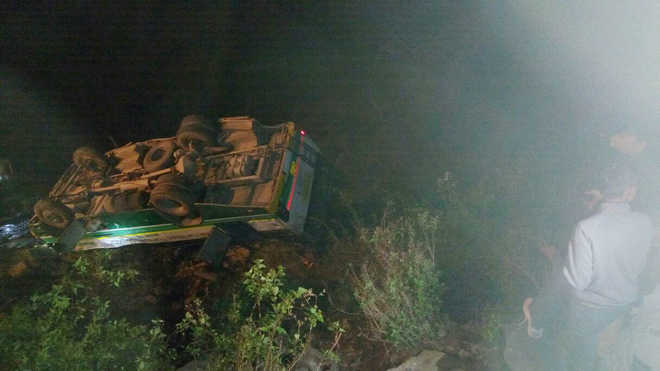 The ill-fated bus that fell into a gorge near Jogindernagar on Saturday night. Tribune photo: Jai Kumar

Twelve persons were killed and 39 others were injured when a Himachal Road Transport Corporation bus plunged into a deep gorge near Galu village, some 10 km from here, in Mandi district at 8 pm last night.

The overcrowded bus carrying over 55 persons was en route to Rekong Peo in Kinnaur district from Dharamsala. The driver failed to negotiate a sharp curve and bus rolled down a hundred feet into a gorge, killing six persons on the spot.

Witnesses told the police that the cause of the accident was overloading and bad condition of the road.

“A portion of the road caved in when the bus was stationary and the driver was allowing another vehicle coming from the opposite side to cross,” a survivor said.

The condition of some of the injured was critical, the police said, adding 39 persons have been injured.

Among whom 20 were admitted in JoginderNagar Hospital and 19 have been rushed to the PGI, Chandigarh, and Government Medical College, Tanda, in Kangra, Ritesh Chouhan, Deputy Commissioner, Kangra, said.

Chief Minister Virbhadra Singh this morning met the injured in Tanda hospital and announced an ex gratia relief of Rs 5 lakh for the next of kin of each of the deceased.

Expressing grief over the mishap, the Chief Minister said, “It was painful to see the seriously injured at Tanda hospital. We will provide all possible help to the injured and kin of the diseased”.

The victims are yet to identified, the police said.

The rescue operations are still on and further details are awaited.

Transport Minister G.S. Bali has ordered a magisterial inquiry into the mishap.  — (With agency inputs)