600 students walk out as law graduates

Chandigarh: More than 600 Panjab University law graduates today received their degrees from Supreme Court judge, Justice Jagdish Singh Khehar, during the third PU Law Convocation at the university. The convocation was jointly organised by the Department of Laws, PU and the University Institute of Legal Studies (UILS), PU Campus. 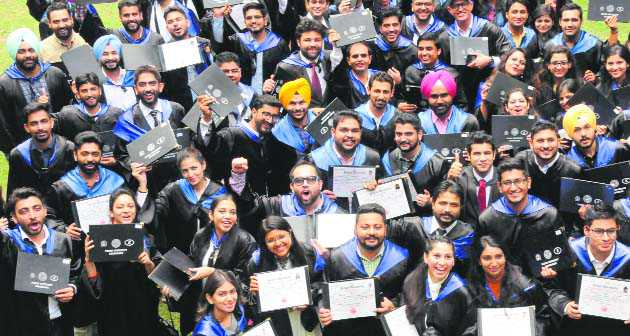 Law graduates with their degrees in a jubilant mood at the PU convocation in Chandigarh on Saturday. Tribune photo: Manoj Mahajan

More than 600 Panjab University law graduates today received their degrees from Supreme Court judge, Justice Jagdish Singh Khehar, during the third PU Law Convocation at the university. The convocation was jointly organised by the Department of Laws, PU and the University Institute of Legal Studies (UILS), PU Campus.

During the convocation, the Law graduate and postgraduate students of LLB, LLM, BA LLB (five year) and BCom LLB (five year) students of 2014-15 from the PU Department of Laws, UILS PU Campus and PU Regional Centres at Hoshiarpur, Ludhiana and Muktsar, were awarded degrees.

Chief Justice of the Punjab and Haryana High Court Justice Shiavax Jal Vazifdar was the guest of honour at the convocation.

While addressing the students, Khehar suggested that instead of adding degrees in one’s profile by joining one course after the other and staying for too long on the campus, it was better to join a profession and serve society.

Recalling his student days, Justice Khehar said there were many students who joined new courses every year to stay on in the hostel but they did not want to take up challenges in life to sustain in the professional world. He described the graduating students as the future of the legal fraternity of the country.

“If I could achieve in my life, you can also, may be better than what I have achieved,” Justice Khehar said while concluding his address with this motivational statement at the convocation.

The toppers from the 2014-15 batches of the UILS and the Department of Laws were felicitated with the GK Chatrath Memorial Medal comprising Rs 5,100 each. The medals were announced in absentia for Tammana R Sherawat and Robinjeet Singh.

Delivering the Mehar Chand Mahajan Memorial Oration Lecture, Justice Khehar recalled the services of Justice Mahajan to the nation and paid rich tributes to him.

In his address, PU Vice-Chancellor Prof Arun K Grover recounted coincidences which marked the day. “This law convocation brings together many happy coincidences. To start with, October 1, it is the day when the PU began functioning in 1947, at Shimla. It is also the birth anniversary of former Dean, Faculty of Law, fellow of the University, late GK Chatrath, who contributed in a colossal way to the governance of the university and growth of both the Department of Laws and the UILS,” he added.

A number of sitting Judges at Punjab and Haryana High Court attended the convocation. The Chairperson, PU Department of Laws, Prof Vijay Nagpal, and the Director, UILS, Prof Sangita Bhalla, PU fellows, many retired Judges of the Punjab and Haryana High Court, former chairpersons of the Department of Laws, eminent lawyers and members from the teaching and legal fraternity also attended the function.

Several students, including some toppers, did not attend the convocation in what they termed was a protest against the charging of Rs 1,000 as registration fee. “It is just like asking for money to award a degree,” said one of the students, who did not wish to be named. Another student questioned, “When we had already completed our studies, what was the point of charging us Rs 1,000 for attending the convocation?” The students alleged that it was for the first time that such a fee was charged from the students of the three-year law course. When contacted, Chairman, Department of Laws, Vijay Nagpal said earlier, the university used to charge the convocation fee from a student in the annual fee itself. But now, the department had recently introduced the feature of a separate convocation, where the students were asked to pay. He said that from next year, no such fee would be charged separately from any student as it would be included in the annual fee of the department.