A slice of royalty : The Tribune India

A slice of royalty 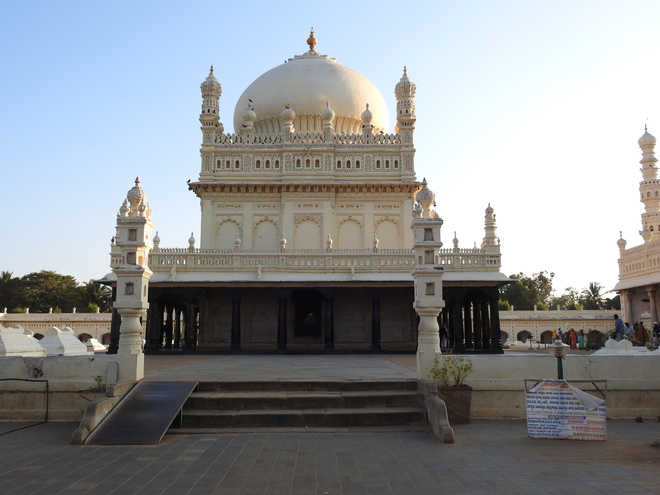 Gumbaz houses the tombs of Tipu Sultan, his parents and close relatives

Located about 25 km from Mysore is the bustling town of Srirangapatna or Srirangapatnam. Apart from being a popular pilgrimage destination, the town of Srirangapatna boasts of a rich past. Intrinsically associated with the legendary ruler of Mysore, Tipu Sultan, the town is known for its famous battle of Seringapatam, which was fought here in 1799. The battle also known as the fourth Anglo-Mysore War saw Tipu Sultan finally succumb at the hands of the British, who had allied with the Nizam of Hyderabad.

A valiant ruler, who had earned the sobriquet of Sher-e-Mysore (Tiger of Mysore), Tipu Sultan fought the British in South India. Under the reign of Hyder Ali and Tipu Sultan, Srirangapatna was the defacto capital of the erstwhile Mysore state. A secular leader, Tipu built many temples.

Replete with monuments built during his regime, the town promises a captivating day tour for those interested in history. And even if you are not, you admire the town for being a testament to the bravey, grit and courage of Tipu Sultan.

The most famous monuments of the town are Tipu Sultan’s summer palace (Daria Daulat Bagh) and his mausoleum (Gumbaz). Set amidst a beautiful garden is the teakwood palace of Tipu Sultan that was built by him in 1784. Constructed in Indo-Sarcenic style, the palace also houses a museum that has scores of artefacts, paintings, furniture, arms, coins and other articles of the era.

The “Storming of Seringapatam”, an oil painting depicting the downfall of Tipu Sultan by Sir Robert Ker Porter is a classic piece of art that vividly describes the battlefield scene. It is one of the main attractions of the museum. The palace was used by Tipu Sultan only for recreational purposes and was not his actual residence.

At a short distance from the palace is the Gumbaz that houses the tombs of Tipu Sultan, his parents and close relatives. A classic Persian styled monument set on an elevated platform, the architecture of the Gumbaz is magnificent. The central dome is supported by fine black granite pillars and the doors have detailed patterns with intricate wood carvings. The inner walls are painted in tiger strips within which are the cenotaphs of Hyder Ali, Fakr-un-Nisa (parents of Tipu) and Tipu Sultan. The surrounding open verandah has several other tombs of members of the Tipu family. Gumbaz is indeed a monument that invokes a poignant memory and fills one with a sense of reverence.

There are several other significant sights inside the town that are associated with the erstwhile king. This includes the massive fort that was built with the help of French architects. The place where the British penetrated its walls and the site where Tipu’s body was found are prominently marked. Inside the fort are the relics of Tipu Sultan’s palace that was destroyed by the British in the war of 1799. Bailey’s dungeon where Tipu Sultan used to imprison British officers is located close to the tomb of the ruler.