Have you ever been in two countries simultaneously or enjoyed a bird’s eye view of four countries at the same time? You can do that by visiting Zugspitze, Germany’s highest mountain peak. 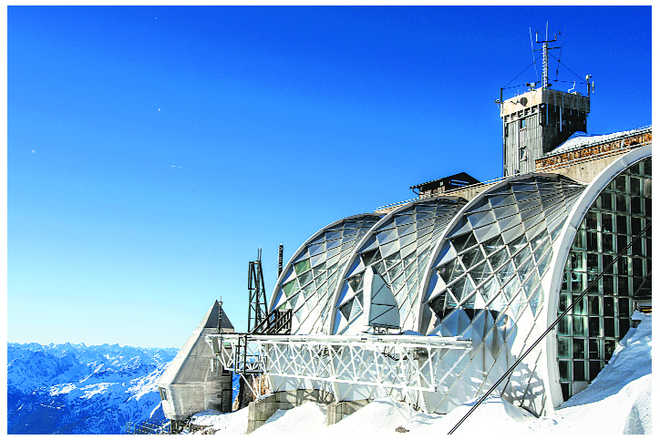 The observatory at Zugspitze

Have you ever been in two countries simultaneously or enjoyed a bird’s eye view of four countries at the same time? You can do that by visiting Zugspitze, Germany’s highest mountain peak.

The border between Germany and Austria runs through the Zugspitze glacier.  Before relaxation of the border controls and visas in the European Union, there actually used to be border posts of both countries atop the peak itself. Now these no longer exist and while walking around the summit, you can well be in Germany at one step and in Austria the next.

Nor do you ever know whether you are looking out over Austria, Germany, Switzerland or Italy at any given moment, though you can go home and claim you viewed the landscape of all four countries.

The journey to Zugspitze starts from a small German town with a long name Garmisch-Partenkirchen, which is situated about two hours from Munich.

Garmisch is to Zugspitze what Kalka is to Shimla, for the mountain railway to ascend Zugspitze begins here. If you are travelling from the Austrian side, you can board the train at Grainau. In nearly 45 minutes, the train brings you to Zugspitzplatt — a journey long enough to soak in the beauty of the towering Alps and the delightful scenery, but short enough not to be boring.

At Zugspitzplatt, you get your first glimpse of the Zugspitze peak and in that awestruck state, you board the cable car that soon takes you to the top. For those who have watched Where Eagles Dare, the cable car ride and the location uncannily resemble a scene from the film.

As you step into the abode of snow, the icy wind hits you with force and the sub-zero chill seeps under your clothes.

Fortunately, you can retreat into the excellent mountain-top restaurants, reinforce yourself with warm beverages and delicious German pastry, put on more winter wear and then step back into the open.

The summit is teeming with tourists and yet as you wander around the big sun deck, you find small corners of solitude, where you can be all alone with the mountain, the clouds and the sound of the wind. The mountain enchants you with its many moods — now calm, sunny and breezy and the next moment angry, dark and windy. They say Zugspitze is a notoriously eccentric peak and can be completely inhospitable many times, even in summer.

When the cold breaches your warmth yet again, you can step into the small museum atop the peak. The museum traces the history of Zugspitze, from the first ascent in 1820 by Lt. Josef Naus to the building of the mountain railway 75 years ago and finally the construction of the cable car in the late 1980s. It’s yet another captivating story of how man conquered nature through determination, courage and skill.

Hours pass and even when you know it’s time to get back to Garmisch, you are struck with a strange reluctance to leave this German Shangri-La. The return journey is no less fascinating, as you descend all the way by cable car. Suspended in mid-air, you watch the breathtaking blue of the Eibsee Lake, looking like some earthly paradise inviting you to take a dip.

Back in Garmisch in just 25 minutes, you blink with disbelief that the excursion is over. But the memorable sights and delights of Zugspitze remain embedded in your mind forever, much clearer than all the photographs you may have taken.

Getting there: Take a Deutsche Bahn train from Munich to Garmisch. From Garmisch to Zugspitze, travel by the mountain railway, followed by cable car.

What to see/do: Enjoy the dazzling view of Alpine peaks and valleys in four countries from the sun deck. Visit the mountain top museum. Skiing on the glacier and trekking possible, depending on the weather. At Garmisch, you can also visit the venue of the 1936 Winter Olympics.

Where to eat: A choice of four cafes and restaurants at the Zugspitze summit and Zugspitzeplatt, the rail head and plateau situated 300 metres below. These include the SonnAlpin, Gipfelalm, Glaciergarden and Panorama 360, serving German, Bavarian and European cuisine.