BATHINDA: The Air India has geared up for operating its maiden flight between Bathinda and Delhi for three days a week taking off from December 11. 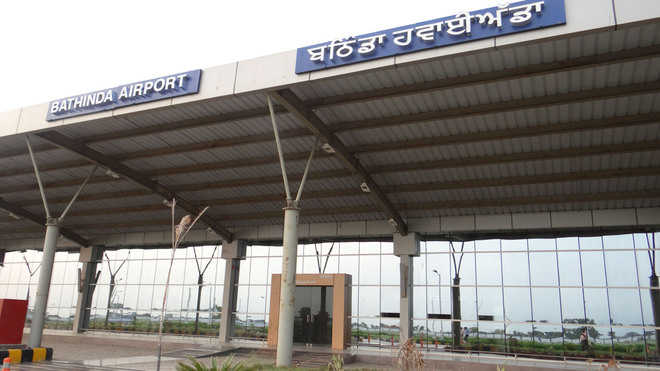 The airport in Bathinda from where Air India is commencing a thrice-a-week flight to Delhi. Tribune Photo: Pawan Sharma

The Air India has geared up for operating its maiden flight between Bathinda and Delhi for three days a week taking off from December 11.

Flights between Bathinda and Delhi have become a reality now with the Air India releasing its flight schedule. Deputy CM Sukbhir Badal had announced in presence of Prime Minister Narendra Modi on November 25 that the Bathinda-Delhi flight would be operational on December 11. He had also exhorted Modi to inaugurate the flight.

The Bathinda airport has virtually remained a non-starter for four years as no airline showed interest in starting flights from a city which was not an industrial or business hub and where business potential for airlines was seemingly bleak.

The Air India will be operating three flights to Bathinda every week on Monday, Thursday and Saturday.

Asked about the airfare for one way or the two-way trip between Bathinda and New Delhi, Negi said the airline management had not opened the bookings for the flight as yet. “Bookings will be opening soon,” he said.

He said staff has been rushed to Bathinda from Amritsar and other airports for ensuring smooth flight operations and to make arrangements for the December 11 maiden Bathinda-New Delhi flight of the Air India.