CHANDIGARH: Even as the Punjab Government is planning a series of events to celebrate 50 years of Punjabi Suba, it seems to have overlooked the fact that it was BR Ambedkar who first suggested to the Akali leadership to seek a Punjabi-speaking state instead of a Sikh homeland. 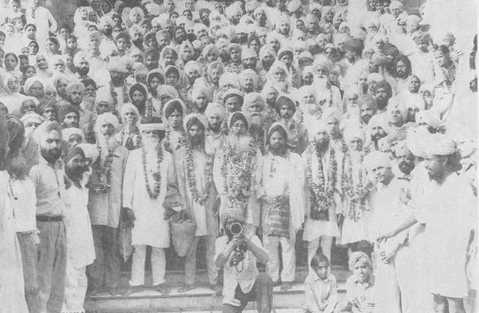 A jatha during a ‘jail bharo andolan’ for Punjabi Suba in the 1950s. File Photo: Punjab Digital Library

Even as the Punjab Government is planning a series of events to celebrate 50 years of Punjabi Suba, it seems to have overlooked the fact that it was BR Ambedkar who first suggested to the Akali leadership to seek a Punjabi-speaking state instead of a Sikh homeland.

‘Fifty Years of Punjab Politics (1920-70)’, a memoir by Harcharan Singh Bajwa — who was a member of the Shiromani Akali Dal Working Committee from 1931 to 1960 – mentions Ambedkar’s meeting with a three-member Akali delegation in January 1948.

From the outset, the Akali Dal, under the leadership of Giani Kartar Singh and Master Tara Singh, had been demanding a Sikh homeland. However, after Independence, the idea failed to find many takers. “The Sikh leadership was groping in the dark,” wrote Bajwa, who died in 1986.

The turning point came when three party leaders — Bajwa, Bhupender Singh Mann and Giani Kartar Singh – met Ambedkar. The latter told them that a demand for a Sikh state would be a cry in the wilderness. “Why don’t you ask for a Punjabi-speaking state? The Congress is committed to a linguistic basis for the reorganisation of the states,” he added.

According to Bajwa, Ambedkar said, “I have told you the way. You can have a Sikh state in the cloak of a Punjabi Suba.” Soon after the meeting, the Akali Dal passed a resolution demanding a Punjabi Suba. Amanpreet Singh Gill, an assistant professor at Delhi University-affiliated Sri Guru Teg Bahadur Khalsa College and the author of ‘Non-Congress Politics in Punjab (1947-2012)’ said Ambedkar’s idea proved to be a breakthrough for the Akalis.

Akali Dal general secretary Sukhdev Singh Dhindsa, who is heading the organising committee for the celebrations, expressed ignorance about Ambedkar’s contribution. “The main mandate of the committee is to commemorate 50 years of Punjabi Suba and honour the families who took part in the struggle,” he said.