Another factory goes up in flames

LUDHIANA: Two days after a fire incident took three lives in the city, another major fire was reported in Doulat Colony of Sundar Nagar today, where a hosiery unit was completely gutted. 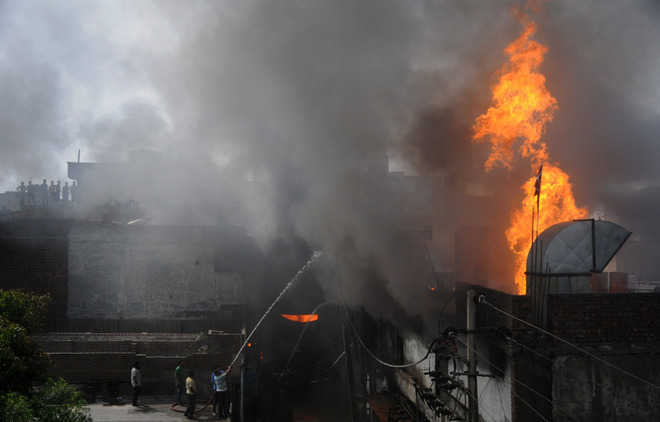 Smoke billows out from the factory that caught fire in Sundar Nagar, Ludhiana, on Saturday. Tribune photos: Himanshu Mahajan

Two days after a fire incident took three lives in the city, another major fire was reported in Doulat Colony of Sundar Nagar today, where a hosiery unit was completely gutted.

However, no loss of life was reported. A double-storey house near the factory, two cars, an auto-rickshaw and a two-wheeler parked in the house was also reduced to ashes.

Sources said goods and machinery worth crores was gutted. Assistant Divisional Fire Officer Rajinder Sharma told The Tribune that short circuit was supposed to be the cause of fire. “Some new machines were being shifted inside the factory with crane today. When the crane was pulling the machinery, it touched electricity wires overhead which caused a spark. First the fibre dumped outside the factory caught fire then a drum of diesel, lying near the generator,” he said. Fortunately, the incident occurred during the lunch time at 1.30 pm, when only some factory labourers or employees were present.

The officials found it difficult to carry out rescue operation smoothly. Officials from the district administration, police department camped at the spot till the time the fire was not controlled. MLAs Surinder Dawar and Sanjay Talwar of the Congress visited the spot to oversee arrangements.

Interestingly, the factory had only one exit point (the main gate), which got blocked due to the fire. Officials were seen requesting a neighbouring factory owner to allow him to break his factory’s wall to enter the factory to douse flames, but he did not give permission. Heated arguments were also witnessed over the issue.

Rescue operation delayed, thanks to ‘photographers’

When the fire brigade men were busy dousing flames, officials of the administration and the police faced a tough time in controlling the rush of unwanted people.

ADC Surbhi Malik played a crucial role in managing the rescue operation. Unwanted people gathered around the factory were seen taking photographs. Despite the officials asking them to stay away, they refused to budge.

When the fire tenders from Ludhiana, Phagwara, Samrala could not control the fire, tenders were called from the Halwara Air Force Station, which used specific anti-fire foam to douse the flames. Since the fire was erupting again and again, it was completely controlled after over six hours, at 7.30 pm.

A family that lost everything...

The fire incident proved unfortunate for a family, whose house was juxtaposed to the factory. It was an irreparable loss for the family of brothers — Hardev and Ranjit, as their two-storey house was completely charred. The house owner runs a shop named Ludhiana Motors. “Two cars, an auto-rickshaw and a two-wheeler was parked outside the house. We have lost everything, hard work of our years has been reduced to ashes. Who will compensate us?” the house owner asked. The family members were themselves seen dousing the flames during the incident. The mother-daughter duo was inside when the house caught fire and they were rescued from the rooftop.

On April 26, three lives were lost when a spinning mill in the Industrial Area caught fire, as there were no fire-safety arrangement. On Saturday’s incident also, ADFO Rajinder Sharma said: “Despite it being a big factory, there was no fire-safety arrangement, due to which the fire could not be controlled immediately. We will issue a notice to the factory owner to seek explanation and required action will be taken.”

Machines, goods arrived on Friday only

Factory employees said new machines and goods worth several lakhs had arrived on Friday only. Along with the functional machines, finished products, everything got gutted.