Lahore is no ordinary city. 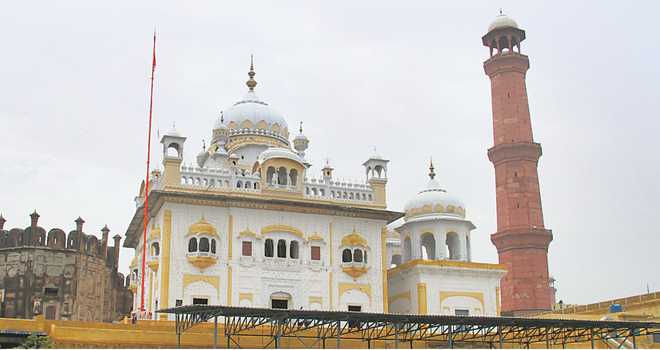 Lahore is no ordinary city. It is a metaphor, appropriated and employed by empires, states and regimes of all kinds over its millennia-long history. In this symbolism, the landscape of the city becomes a medium through which kings, queens, administrators and politicians express their rhetoric and political ambitions.

For example, the city under Dara Shikoh became a symbol of his love towards his Sufi mentor, Mian Mir. The greatest infrastructural project that he planned, a pathway of red tiles, from his palace at Naulakha to the shrine of Mian Mir, was an expression of this love. The project could never be materialised as the war for the Mughal throne ensued pitting all the brothers against each other. Emperor Aurangzeb, who took over the Mughal throne, used the red tiles to construct another symbol, something that has come to represent the city of Lahore — Badshahi Masjid.

Maharaja Ranjit Singh too appropriated the symbol for himself. He conquered the city in 1799 and soon after got himself declared Maharaja. While Lahore before the conquest had lost much of its charm, replaced by the burgeoning Amritsar, the metaphor remained. For Ranjit Singh it was the capture of Lahore that was the ultimate step, transforming him from a warlord to a Maharaja. Lahore was a symbol of Mughal power, on whose model Maharaja Ranjit Singh fashioned his Lahore Durbar.

Under the British, Lahore was to transform into its most potent symbol. On one hand, the construction of civil lines, Mall Road, and the cantonment, in a grid, with wide avenues and spacious bungalows, when compared to the congested houses and the winding roads of the walled city, symbolised the emergence of a new more ‘organised’ and ‘scientific’ empire. On the other hand, the development of saracenic architecture that amalgamated traditional Indian architecture with the European style, represented in the buildings of Punjab University, Lahore Museum and Lahore High Court, represented a certain continuity, with the British casting themselves as the ‘successors’ of the Mughal Empire. This new city of Lahore, a modern incarnation of an ancient city, was a powerful symbol the British would use to justify their rule.

Facing the Punjab Parliament on the Mall Road was the statue of Queen Victoria, sitting under a pavilion that borrowed from the Mughal architectural tradition. The British Queen appropriating Mughal architecture was the epitome of this symbolism, of this need to show a continuity between the ancient and modern Lahore. A few kilometres from here, next to the Lahore High Court was the statue of John Lawrence, who before serving as the Viceroy of British India served as the Chief Commissioner of Punjab, overseeing the transitioning of Punjab from the Sikh empire to the British. Most importantly, it was his role during the ‘rebellion’ of 1857 that transformed him into a legend, with him single handedly coming to the rescue of the Empire. The iconic statue that was removed in the 1920s after much protestation held a sword in one hand, and a pen in the other, with the following line at its base, “Will you be governed by the pen or sword?”

Similar to architecture, statues played an important role in articulating the political aspirations of the State. The one of John Lawrence, for example, expressed how the ‘benevolent’ British empire was willing to use force if the people were not ready to accept this ‘scientifically superior race’. Next to the King Edward Medical College there was a statue of King Edward. Outside the wall of Punjab University was the statue of Alfred Woolner, the former Vice Chancellor of the university. Lahore, which continues to be the educational hub of Pakistan, first became the educational hub during the British empire. Out of all the statues that once existed in Lahore, this is the only one that has survived.

In the later half of the 20th century, as Lahore slowly became the symbol of the nationalist movement, a couple of other statues across the city sprung up marking this transition. Close to Nasir Bagh was the statue of Lala Lajpat Rai, the popular Congress leader from Lahore, whose death was ‘avenged’ by Bhagat Singh and his comrades. On the Mall Road was also the statue of Sir Ganga Ram, the civil engineer who gave the city some of its most iconic buildings in the early 20th century.

After the creation of Pakistan, the city of Lahore was to experience another transformation, this time re-emerging as yet another metaphor, a symbol, which it, in many ways, continues to serve. The largest city of the newly created country before Karachi eventually overtook it, Lahore became the symbol of Pakistani nationalism. Roads, junctions and buildings that were named after colonial officers or prominent Congress leaders were replaced by Muslim League leaders. Lawrence Hall became Quaid-i-Azam library. The Mall Road became Shahrah-e-Quaid-i-Azam, while Krishan Nagar became Islampura. The statues, symbols of a different era were removed. Lala Lajpat Rai was moved to Shimla. Ganga Ram was destroyed during Partition; Queen Victoria was moved to the Lahore Museum. No new statues replaced them, as under a certain interpretation of religion, statues were deemed to be seen as un-Islamic. Lahore, from 1947 onwards, came to be seen as a symbol of Islamic nationalism. While some of the colonial names and symbols were retained, the biggest victims of this newfound metaphor were Hindu and Sikh symbols.

In this context how is then one to interpret the recently inaugurated statue of Maharaja Ranjit Singh inside the Lahore Fort? For years we have gone out of our way to cast the Sikh history of the city in a particular framework. The years of Sikh rule in Punjab, which predate the rise of Ranjit Singh and also continue for a few years after him, are projected in the Pakistani historiography as tumultuous years, particularly for the Muslims. While part of it is propaganda, there are certain truths behind it as well. For example, it is true that under Maharaja Ranjit Singh the Badshahi Masjid was used as a stable. There is also a popular story of him spending a night on the minaret of Masjid Wazir Khan with his favourite consort, Moran Sarkar.

The problem is not the inclusion of these stories. The problem is the selective inclusion of stories and choosing to drop others to fit a particular narrative. So while students will be taught that Ranjit Singh used Badshahi Masjid for a stable, they will not be taught how one of his wives, Maharani Jind Kaur, the mother of Maharaja Duleep Singh, donated a collection of handwritten Korans to Data Darbar, or how on the insistence of his Muslim minister, Ranjit Singh renovated and handed over the Sunehri Masjid of Lahore to Muslims, which had been converted into a gurdwara before he came to power.

In this narrative, what is also conveniently ignored is the political persecution of the Sikh gurus and the community by the Mughals. The executions of Guru Arjan Dev at the hands of Emperor Jahangir and of Guru Tegh Bahadur on the orders of Emperor Aurangzeb are not mentioned. What is also not mentioned is the phoenix-like rise of a persecuted religious minority to the pinnacle of power under Maharaja Ranjit Singh.

What Ranjit Singh represents to the Sikh community today needs to be understood in the background of centuries of persecution of the community at the hands of the Mughals and their cronies. Towards the end of the Mughal empire, there came a time when to be born a Sikh carried with itself a death warrant. Such was the religious bigotry of some of the Mughal governors of Punjab. In less than a century emerged Maharaja Ranjit Singh, who transformed the most persecuted minority of Punjab into its ruling class. Ranjit Singh was no religious leader. He was a secular ruler, rather shrewd, who sometimes appropriated religious symbols for political gains, as rulers have done and continue to do. However, in Sikh iconography, he acquired a religious significance, primarily because of how persecuted the community was only a few years before his rise.

By honouring Maharaja Ranjit Singh, the government of Pakistan has undertaken a wonderful step, sidestepping decades of policy. It represents how the country today is willing to move beyond the narrow conceptions of Muslim versus Sikh history, but rather willing to accommodate a more holistic history. Interestingly, this comes at a time when we are almost seeing a reverse direction in India with deliberate sidelining of Muslim history and heritage. This is a step in the right direction, a step that shows how Pakistan is willing to share its most important metaphor, Lahore, with other religious communities. Let’s hope this step is followed by several others.