SHIMLA: The artefacts stolen last month from Chief Minister Virbhadra Singh’s ancestral palace in Sarahan in Shimla district have been recovered, the police said on Wednesday. 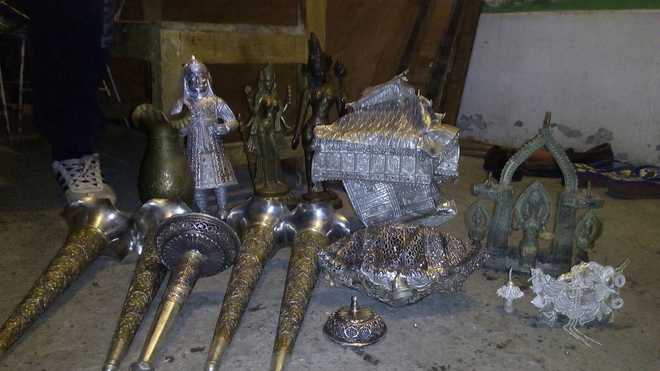 Recovered artefacts on display in Shimla on Wednesday. A Tribune photo

The artefacts stolen last month from Chief Minister Virbhadra Singh’s ancestral palace in Sarahan in Shimla district have been recovered, the police said on Wednesday.

He said more articles have been recovered as compared to what were reported stolen by the palace staff.

The Shanti Kunj palace of the Chief Minister at Sarahan, 170 km from here, was burgled on October 23.

The stolen articles include one silver table lamp of 1 kg, four silver flower pots each weighing about 250 gm and one silver temple, the police said.

The palace is close to the famous Bhimakali Temple. — IANS