SHIMLA: The Parwanoo-Solan four-laning project has suffered a major setback with the National Green Tribunal (NGT) imposing a ban on the felling of trees. Against the target of 10 per cent, only 8 per cent work has been completed so far. 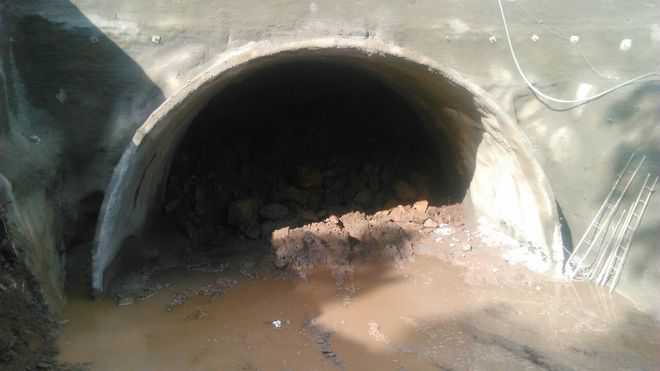 Muddy water accumulates at the entrance of the under-construction tunnel. Tribune photo

The Parwanoo-Solan four-laning project has suffered a major setback with the National Green Tribunal (NGT) imposing a ban on the felling of trees.

Against the target of 10 per cent, only 8 per cent work has been completed so far.

“The deadline for the completion of work on the 39.139 km stretch is March 2018, but due to heavy rush of vehicles during May and June coupled with rain, the progress remained slow. The May 20 ban has only made things difficult,” said General Manager, National Highways Authority of India (NHAI), Himachal, Col Ram Swaroop Puri (retd).

“Due to the difficult hill topography, loose strata at various sites, opposite/steep slopes and bad weather, shooting stones keep falling even after roads are completed and opened to traffic,” he added.

Under the Rs 748-crore project, a 380 m long flyover, four minor bridges with combined length of 99.35 m, two railway overbridges, two overpasses, one underpass and 825 m tunnel are to be constructed. So far, only 15 m has been completed. Over 20 hectares of private land has been acquired and compensation of Rs 45 crore has been paid while Rs 230 crore has been earmarked for land acquisition.

Puri said during the construction work, 10 m road has to be kept open for traffic while 22 m has to be widened.

Precautions are needed to be taken to avoid any untoward incident. As such, steps like diverting light vehicles through Barog, removal of debris, erecting concrete parapets, putting heavy iron plates in slide-prone locations and marking the edges of the road to guide drivers have been taken.

On safety arrangements, Puri said 30 persons were deployed on landslide-prone spots during normal days and after the accident on the bypass in which one person was killed, the number was increased to 50.

Three patrolling vehicles and 15 vehicles equipped with first-aid/safety equipment are in place round the clock. “Officials visit the site regularly,” Puri said.