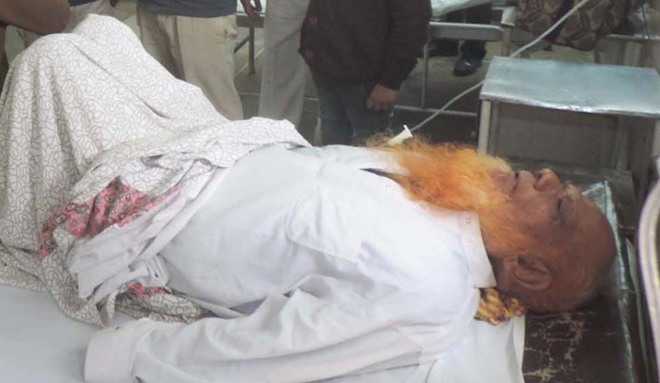 An alleged Lashkar-e-Toiba bomb-maker accused of masterminding around 40 bombings in India, Tunda was arrested by the Delhi Police at the India-Nepal border in 2013.

On the direction of Additional Session Judge VP Sirohi in Panipat, he was sent to Karnal jail last evening in connection with a bomb blast in a private bus in Panipat on February 1, 1997, in which a 10-year-old was killed and several others were injured.

Police officials said Tunda was also a suspect in a blast in Sonepat in which 12 persons were injured on December 28,1996. The Rohtak police had also booked Tunda for his alleged involvement in two blasts in Rohtak in 1997.

Delhi-born Tunda (73) was taken to the trauma centre at Kalpana Chawla Government Medical College Hospital (KCGMCH) amid high security after the attack. As per the jail authorities, Tunda is fine and shifted back to the jail.

Jail superindendent Sher Singh said the incident took place around 9 am when Tunda was taking tea with Amandeep of Panipat and Joginder of Jind. The two jail inmates tried to strangle Tunda after a brawl, he said. However, timely intervention by duty officials saved Tunda, the jail superintendent said.

A team of the Karnal police visited the jail along with CIA staff and inspected the site, besides questioning officials and inmates there. The police was looking for the motive of the attack on Tunda.

The security of Tunda, who is to be produced in a Panipat court tomorrow, has been tightened, said Sher Singh.