City makes 92% cycles in India, yet has no safe cycle track

LUDHIANA: Despite the industrial hub of Punjab, Ludhiana, has been manufacturing about 92 per cent bicycles in India, yet the city has not even a single cycling track for residents. 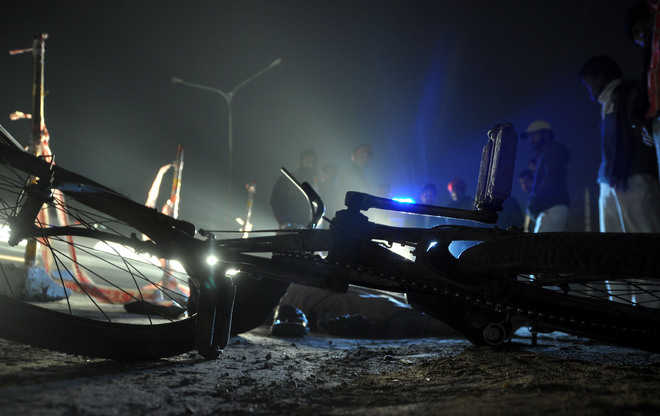 The smashed cycle of a man, who died in an accident on NH- 1 near Grain Market in Ludhiana. A File Photo

Despite the industrial hub of Punjab, Ludhiana, has been manufacturing about 92 per cent bicycles in India, yet the city has not even a single cycling track for residents.

The cycling velodrome at Punjab Agricultural University (PAU) and a small track at Rakh Bagh are not able to accommodate even the number of cyclists who are pursuing cycling as their hobby to keep themselves fit. Those who could not find space at the PAU or Rakh Bagh have no other alternative but to hit the city roads, where their lives always remain at risk.

There is a huge difference between the percentage of people pursuing cycling as hobby and those who have chosen cycle as a mode of transportation due to their meagre income. The latter category is more prone to road mishaps as they hit the road more than avid cyclists.

The death of avid cyclist Dipesh Jain on the South City road has highlighted poor infrastructure to promote cycling and lack of control over speeding vehicles in the city.

Navdeep Asija, a traffic adviser to Punjab, said, in 2013, 2014, and 2015, around 682 road accidents took place in Ludhiana, claiming the lives of 710 persons, including 246 pedestrians and 90 cyclists. He said, the construction of overbridges and highways would not alone bring down the number of road accidents. Special cycle tracks is the need of the hour.

“As per my survey of Ludhiana city, of 100 people, four persons travel in cars. But if we talk about the bicycle as mode of transportation, around 57 persons out of 100 in the city prefer cycle. Even in India, 1.5 per cent people have cars. That means by building flyovers and big roads, we are providing infrastructure for cars only while no penny is being spent on constructing tracks for cyclists,” said Asija.

Even as per the Road Transport Ministry’s report, Ludhiana city has become “deadliest” in India. The chances of getting killed in a road accident in the city are highest in the whole country with the chance percentage standing at 67. Amritsar stands second at around 60 per cent. Even the NCRB report says Ludhiana is ‘number three’ amongst 53 of India’s biggest cities in terms of the percentage rise in road accidents and consequent fatalities.

Gurmeet Kular, President of FICO, said it was a good initiative to build a track alongside the canal. Three industrial houses, including Avon Cycles, Ralson India and FICO, were to chip in Rs 6 crore for the project, the cost of which was around Rs 6.5 crore. Owing to the apathy of the MC and the Forest Department, the project has been hanging fire for a long time. Industrial houses had even started work to build the track but the Forest Department issued notices and asked to stop work, and threatened to file an FIR as well. “We are still positive to take the project forward to build a track for the city residents, so that they can enjoy cycling in a safe manner” he said.

Mridula Jain, representative of NGO, Let’s Clean Ludhiana, said the district and police administration have not learnt any lessons from the past incidents that snuffed out lives of four youngsters, including two girls, on the South City road. Yet another incident that cost the life of a cyclist on the same road should be the last lesson. It is high time that enough should be done to save the precious lives. Now, the Police Commissioner has assured that all loopholes that are causing road mishaps in South City will be plugged soon and NGOs would also spread awareness on road safety.

Police Commissioner Jatinder Aulakh said it was quite sad that a cyclist lost life in a hit-and-run accident on the South City road. Several NGOs had approached him to take preventive measures for the safety of cyclists on that road. “Being the head of the Police Department, I will definitely take some concrete steps to safeguard the interests of the city residents. ADCP-Traffic Dhruv Dahiya has been asked to prepare a comprehensive road safety plan and find the causes for accidents. The police will leave no stone unturned to prevent road mishaps on the city roads,”Aulakh added.

A prominent project for cyclists and joggers planned alongside the Sidhwan Canal has not seen an inch of progress in a year. The project worth Rs 6.5 crore was to be funded by industrial houses along with little contribution from the MC. As per the project plan, a 16-foot-wide and 6.5-km-long track would be built alongside the canal on the Ferozepur road. Interestingly, former Akali minister Sharanjit Dhillon had also laid the foundation stone of the project in February last year, and as per his assurances, it was to be completed by March this year. However, not even a single brick has been laid there so far. Avid cyclists alleged that due to the poor management of the MC and the lack of political will, the project could not be started. They said the MC had failed to get clearance certificate from the Forest Department for the project.

Ranjod Singh, President ofthe  Ludhiana Pedalers Club said owing to the recent accident that snuffed out the live of an avid cyclist, Dipesh Jain, on the South City road, cycling lovers might feel discouraged. Such incidents obviously demotivate the cyclists who wanted to keep their hobby alive forever. The pedalers club and other like-minded groups have been organising a number of events to promote cycling but due to the lack of even a single cycling track in the city, their awareness campaigns could not yield the expected results. If the administration is really serious abut promoting cycling, it should give priority to the safety of cyclists by creating separate tracks in the city.