Kairana in western UP is in the headlines again after Tabassum Hassan’s win in the recently concluded byelection. 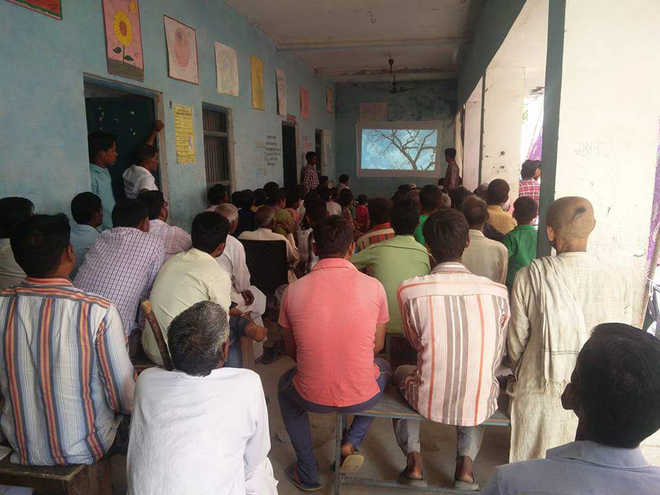 Keeping a check: Villagers at one of the screenings being held by Chalchitra Abhiyaan

Kairana in western UP is in the headlines again after Tabassum Hassan’s win in the recently concluded byelection. Kairana last made news because of the large Hindu exodus theory propagated by certain vested interests. A large part of the local and national media either played ball or got stuck in the binaries of Hindu vs Muslim but a film and media collective, ‘Chalchitra Abhiyaan’, with its documentary film Kairana — After the Headlines, has been able to bring forth the real problems being faced by the locals.

In one of the scenes from the documentary, a Hindu priest is talking to a Muslim resident on the steps of the village temple. The priest tells him how the temple shares a wall with a Muslim resident’s house. In another scene, people are talking about problems like lack of business opportunities. Another film by the initiative called Muavza (Compensation), talks about the plight of the riot-affected people of Muzaffarnagar, who are reeling under the pressure of restarting their lives.

There is a need to “create a counter narrative,” says Nakul Singh Sawhney (known for documentaries like Muzaffarnagar Baaqi Hai and Izzat Nagari ki Asabhya Betiyaan), the force behind Chalchitra Abhiyaan. The idea of the counter narrative is to look beyond the scope of surface-level outlook towards the problems of the area.

In the wake of the Muzaffarnagar and Shamli riots in 2013 certain WhatsApp videos and photographs were allegedly passed around to incite communal violence. Therefore, says the filmmaker, it became important to create a media collective at whose core were the people who were being reported. Out of this need was born the Chalchitra Abhiyaan which aimed at training people of western UP to make short YouTube videos, short films and documentaries about the problems plaguing their daily lives.

The initiative wants to make a cultural intervention too. For this, it has been holding fortnightly screenings of progressive films (Indian and international) for the villagers. The aim is to get villagers to volunteer and become full-time working members of the movement, and most importantly, start a discussion on caste and gender. Hence, Chalchitra Abhiyaan organised a screening of Turup by Ektara collective, which talks about Love Jihad at a place where an honour killing took place 20 years ago. There have been screenings of vernacular language films also like Fandry (Marathi) by Nagraj Manjule, which talks about caste discrimination and violence in a small village in Maharashtra.

There are various filmmaking collectives and documentary initiatives functioning out of big metropolitans but Chalchitra Abhiyaan aims to operate from ground zero, resulting in them being part of the churnings of the area. Consequently, when the Bhim Army was being vilified after the May 5 incident of caste-based violence in the Shabbirpur village last year, Chalchitra Abhiyaan was busy getting out the stories of intervention done by Bhim Army in matters of caste, and the nation was just waking up to discover Bhim Army and being misinformed by the popular media. Their videos went viral (mostly by being plugged to various portals). These helped people understand the vested political interests in such a situation. Recently, a video by them documenting the anger of the people over the imposition of NSA on Bhim Army leader Chandrashekhar received somewhere around 66,000 views on a news portal. In their existence of almost a year, the initiative has produced a prolific amount of work, including three documentary films, three videos on violence and three live broadcasts. Eventually, it also aims at making fiction films and train its workers to make films about their land.

The collective, says Sawhney, is at its nascent stage and any decentralised structure takes time to fruition. One of the biggest challenges they face is that of the lack of resources. For example, there is just one projector, which a volunteer, Vishal Kumar, uses to screen films. Decent equipment will be needed to train people and make films. The mandate of the initiative is also to enable people from these demographics to make this a sustainable livelihood by regularly engaging in work.

Its crowd-funding pitches have caused a considerable amount of attention to their work. The initiative has been able to collect around Rs 8 lakh but clearly requires more, besides regular funding to make their work sustainable. They are also in the process of setting up an office in Kandla, Shamli district in western UP. Women are also increasingly joining the ranks of the abhiyaan.

In an age of information, it is imperative that the people should be able to counter the manipulations by the powers that be. Chalchitra Abhiyaan is working towards a future that could possibly be the answer to complex questions like casteism, communalism and gender based-discrimination in our country.