Derry’s date with the devil

IN a couple of weeks from now, Derry-Londonderry will be ready for action. 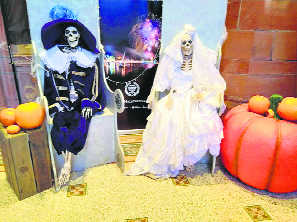 Halloween sculptures and figures on display

IN a couple of weeks from now, Derry-Londonderry will be ready for action. Yes, that’s when not just those originally from ‘Derryeh’ (that’s the closest to the way the locals pronounce it) but also visitors from across the world will try to head there for a date with the devil. And why not, for the past four years, Derry has been basking in the title of the ‘Best Halloween destination in the world’(by a US readers’ poll) — having overtaken Salem in Massachusetts that has a history of witch trials, and even Transylvania, home of the deadly Dracula.

For those not in the loop, the spirit of Halloween is believed to have its roots in Irish history, and should you mention its American connection, ‘Derry-ites’ will brush it aside with characteristic candor. “No, Halloween belongs to us. The association with Guy Fawkes came later.”

Northern Ireland, rather Derry, they insist, is the place where Halloween festivities commenced. According to them, its origins go back to a thousand years — to the time of the ancient Celtic festival of Samhain (that marks the end of the harvest season) when ghosts of the dead are believed to come back and mingle with ‘earthlings’.

Creativity with all things macabre becomes the buzzword and decorations spring up not just around the city but also in front of shops and houses. Skeletons sitting around or waving as you walk past, witches giving toothless grins, images of ghosts, cobwebs, headstones, etc. all done to spook away the evil spirits — all add to the fun.

The city centre close to the historic Londonderry walls is the place to be from the morning itself with loud music blaring, youngsters hanging around in groups, pubs filled to the brim... And as evening descends, you could have lots of fun-filled encounters with ‘visitors’ from the Other World. In costumes ranging from blood-dripping vampires to pirates, monsters, werewolves, unicorns and even Batsman and Catswoman, both kids and grown-ups join in the fun that also includes a carnival parade that snakes its way through the centre of town. The day comes to a close with a beautiful display of fireworks.

The Halloween ‘hangover’ dealt with, the next morning you must head out to discover the delights of Derry. Start with the Walls boasting a mind-boggling width of around 12 to 35 feet — that helped the city remain “impregnable” from any foreign invasions. A walk on the cobbled pathways that run alongside unveils imposing bastions, entry points, watchtowers, battlements and the many restored cannons dating back to erstwhile battles, and Derry has seen quite a few deadly ones.

Another option is a quick, bracing walk on the elegantly designed Derry Peace Bridge over the River Foyle. Opened in 2011, this ‘S’ shaped structure also known as Bendy Bridge looks like, as the locals will tell you, a huge steel snake from a height. It was built to bridge the gap between the Protestants and Catholics, who lived only with their own respective groups on either side of the river.

Derry’s Roseville Street presents an arresting sight — of huge murals painted on its walls. ‘Political statements’ of the 1970s, these were created as a form of protest by Catholics against the policies created by the British and the resultant lack of job opportunities for them. A little ahead, close to the wall that says ‘You Are Now Entering Free Derry’ lies the award-winning Museum of Free Derry that tells the story of the civil rights movement and the creation of Free Derry.

Besides the imposing St Columb’s Cathedral that goes back to 1633, a visit to the Museum of the Moon is a must. Housed in the town’s Guildhall, it features a giant seven-metre diameter, illuminated scale model of the Earth’s only satellite. UK artist Luke Jerram has used detailed NASA imagery to make what he hopes will be the closest people can come to experiencing and exploring the moon’s surface.