Deterioration in North India’s air quality during the early winter months has become a regular feature over the past few years. Schools are closed, breathing masks are distributed, construction activities are suspended, vehicle movement is restricted, flights are diverted, and fingers are pointed. A significant amount of blame is laid on farmers in Punjab and Haryana for burning crop residue after paddy harvest. 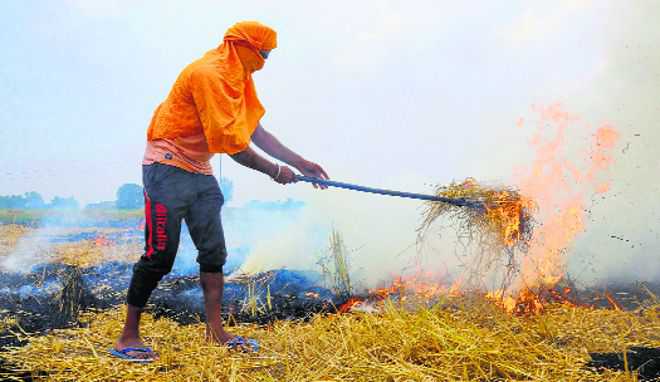 Deterioration in North India’s air quality during the early winter months has become a regular feature over the past few years. Schools are closed, breathing masks are distributed, construction activities are suspended, vehicle movement is restricted, flights are diverted, and fingers are pointed. A significant amount of blame is laid on farmers in Punjab and Haryana for burning crop residue after paddy harvest. There is ample evidence that smoke from burning stubble in these regions is a big source of air pollution during these days. According to the Central Government’s air quality monitoring programme SAFAR, on November 1, agricultural fires accounted for almost half of Delhi’s air pollution load.

The point where the discussion loses nuance is when farmers are blamed for setting their fields on fire. To understand this enigma, one needs to go back a few decades. North India, particularly Punjab and Haryana, was the epicentre of the Green Revolution in the 1960s. Huge government incentives in the form of improved seed varieties, easy loans, power subsidies, and assured prices for wheat and rice encouraged farmers to adopt the wheat-rice cropping pattern. Fast-forward to today, all policies (agricultural or otherwise) manifest in such a way that farmers receive maximum economic returns from growing these two crops. In 2009, Punjab and Haryana enacted laws to delay paddy sowing by a few weeks into the monsoon season to reduce groundwater use. As a result, paddy harvest got pushed closer to the next crop’s sowing window, leading to concentration of crop residue burning over fewer days amid meteorological conditions that favour pollutants’ accumulation over North India. Hence, a potent mixture of unintended consequences of myopic policies is what worsens Delhi’s air pollution, not the farmers.

The current hazardous air quality is not a Delhi phenomenon, although the latter has received most of the media attention. The ones affected most by smoke from stubble burning are the farmers themselves. They are exposed to even worse air quality than city-dwellers by virtue of living closer to the source. While the fire burns, farmers spend hours in their fields to control its spread, lest it enters neighbouring fields. They are cognisant of the fact that it is hazardous for their and their families’ health. At the same time, fires are extremely detrimental to soil quality, harming both soil biota and fertility.

Currently, there is no viable alternative to burning because time constraints are stacked against farmers as they need to quickly clear the field for planting the next crop. To its credit, the Punjab Government, under a Central scheme, has subsidised machines for in situ crop residue management without burning. As of today, 14,000 Happy Seeders and 6,000 Super-Straw Management Systems have been procured and distributed. However, the initiative is still not enough to manage the stubble on 30 lakh hectares under paddy cultivation in Punjab. A major impediment is the short 25-30-day window for sowing the next crop, because of which this expensive machinery gathers dust for the rest of the year. Despite the subsidy, these machines are not an economically feasible option for small farmers. Even if there were enough Happy Seeders, they need bigger tractors and consume a lot of diesel, another source of air pollution.

Indian farmers, especially those growing wheat-rice, are unique players in the economy because most of them operate in a closed market. The procurement price of their produce is fixed by the government, which keeps the country’s food prices under control. Since farmers have little control on their profits, it is unfair to expect them to absorb all the extra cost of stubble management. Policy-makers can break the annual stubble burning cycle by increasing the minimum support price (MSP) to factor in the cost of crop residue management. Once this cost is internalised into the price that farmers receive, the ban on agricultural fires should be strictly enforced and defaulters punished. The Supreme Court recently directed the governments of Punjab, Haryana and Uttar Pradesh to provide Rs 100 per quintal to farmers who manage crop residue without burning. It is premature to judge the success of this initiative.

Governments can also collect and process crop residue in Central facilities. There are studies proposing this residue as a source of renewable energy. MS Swaminathan, the architect of the Green Revolution, has proposed manufacturing paper, cardboard and animal feed from paddy stubble. There is a need to make such eco-friendly alternatives economically feasible for all players concerned.

To drive home the point that farmers are not solely responsible for agricultural fires, let’s use an analogy from another area, that of urban sewage water in Delhi. More than half of Delhi’s domestic sewage goes into the Yamuna without any treatment. It has detrimental effects on people downstream of Delhi who depend on the Yamuna for their water. We rightfully hold the government, and not Delhi residents, responsible for failing to establish facilities for treating this sewage water. Similarly, farmers alone cannot be forced to bear the burden of managing crop residue. They do not operate in isolation, and should not be pushed into the line of fire alone.

There is already legislation banning farm fires, but its implementation goes up in smoke every year. Centuries of failed policies and laws have taught us that when there are no alternatives, directives and diktats are bound to fail. This is a bigger societal problem, one that requires all levels of society, especially state and Central governments, to come together so that our citizens, both rural and urban, can breathe in a cleaner environment. We are all in this together, so let us end this blame game and find a solution collectively.

The author is a research scholar at the Institute for Resources, Environment and Sustainability, University of British Columbia, Vancouver