Patiala: In written orders, the Returning Officer has asked former Army chief JJ Singh “not to wear” his medals during his political campaign as it amounts to the violation of the model code of conduct. 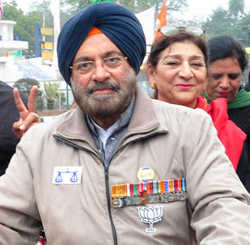 Patiala: In written orders, the Returning Officer has asked former Army chief JJ Singh “not to wear” his medals during his political campaign as it amounts to the violation of the model code of conduct. Shiromani Akali Dal member Joginder Jaswant Singh was named the SAD-BJP candidate from Patiala. During his election campaign, JJ Singh was seen wearing 20 medals he had bagged during his stint in the Army. In the past over three weeks, he was seen canvassing in an open jeep, with a handful of supporters following his vehicle while he addressed the public with the medals on his chest. Following a complaint by a former Army Captain Amarjit Singh Jaijee, the Returning Officer issued a show cause notice to JJ Singh a few days back. In his complaint, Jaijee had alleged that the ex-Army chief was lowering the dignity of the Army by using the medals to garner political votes in the city. He further had alleged that such medals being should not be worn on political functions. — TNS