SRINAGAR: For the first time in the known history of Kashmir, Eid congregational prayers were today not allowed at the Srinagar’s grand mosque, Hazratbal Dargah, and other major Sufi shrines of the city as the government imposed a strict curfew to thwart the march to the United Nation’s mission office. 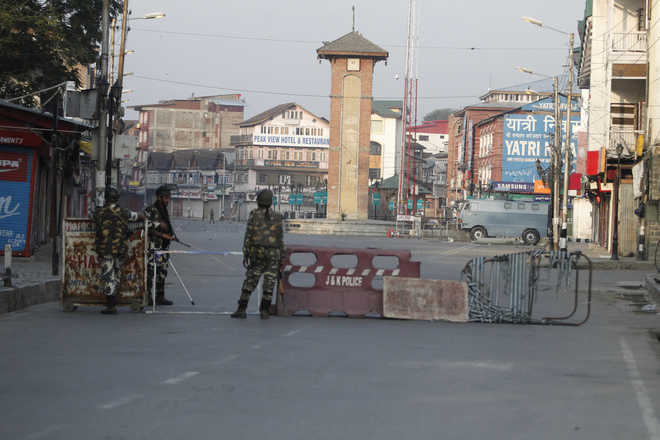 For the first time in the known history of Kashmir, Eid congregational prayers were today not allowed at the Srinagar’s grand mosque, Hazratbal Dargah, and other major Sufi shrines of the city as the government imposed a strict curfew to thwart the march to the United Nation’s mission office.

According to the Islamic injunctions, the Eid prayers are supposed to be offered in open designated spaces known as Eidgah and if the weather is bad, like in case of rain or snow, then in mosques.

Owing to the curfew, Eid prayers were also not allowed today at Jamia Masjid in the Nowhatta area of Srinagar, a historic place and witness to many ups and downs since it was first built by Sultan Sikandar Shah Shahmiri in 1394. The people associated with the grand mosque said in the past restrictions had been put on the Friday prayers at the mosque, but never were people disallowed from offering Eid prayers.

“Today, a new dark chapter in the history of Kashmir has been created by the government after it disallowed Eid prayers inside the Jamia Masjid. During the Sikh rule and later during the reign of Dogra rulers, at least Kashmiri Muslims were allowed to offer Eid prayers at Jamia,” said Syed Rehman Shams, the secretary of moderate separatist leader Mirwaiz Unar Farooq. Rehman is the member of the Auqaf Committee managing the affairs of the Jamia Mosque, Srinagar.

Prayers were also not allowed at the revered Sufi shrine of Syed Yaqoob Sahab in the posh Sonawar area, where the political elite of Kashmir would regularly pray on Eid, even in most difficult times. Likewise, people were not allowed to offer Eid congregational prayers at famous Hazratbal shrine, housing the relic of Prophet Mohammad, and the famous Sufi shrine of Dastageer Sahab in Khanyar besides the Khanq-e-Mualla mosque and shrine in downtown Srinagar. Just a few people offered prayers at Mukhdoom Sahab Sufi shrine atop Koh-i-Maran hillock in the city.

“No prayers were allowed today at Yaqoob Sahab shrine and mosque as these were locked,” said Rafi Ahmad Mir, secretary, J&K Muslim Wakf Board, which manages the shrine.

In the past, though the weekly Friday prayers have been disrupted many a times at the major mosques and shrines of the summer capital, it is for the first time in the modern time that the curfew had been imposed on Eid and prayers disallowed.

Locals said no major gathering was also allowed at Hazratbal. However, selected few people from the local Dobi Mohalla were later allowed to offer prayers at the shrine, an official said.

“In the recent political history of Kashmir, I don’t remember any government imposing curfew and disallowing Eid congregational prayers. Barring the periods of Dargah siege, it is unprecedented that there have been no Eid prayers at Harztbal shrine,” political scientist Prof Noor Ahmad Baba told the Tribune.

Asked if the imposition of the curfew on Eid and lockdown of the major mosques and shrines was going to have any long-term effect on the local psyche, Baba said, “By imposing the curfew the government wanted to prevent people from marching to the UN office. Though that has been stopped, it can further alienate the people. By this act, the government has stopped and punished even those people who wanted to celebrate the Eid,” Baba said.