Electric buses on Rohtang route likely from next year

SHIMLA: With the successful trial run of electric buses on the ecologically fragile Manali-Rohtang route, it is being expected that these battery operated buses will start plying by the next summer season as per the directions of the National Green Tribunal. 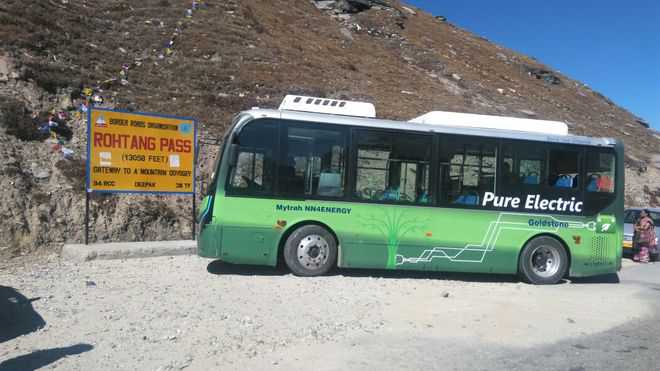 The HRTC will meet shortly to take a final call on inviting Ashok Leyland and Gold Stone that have evinced interest in providing these buses. Photo: MC Thakur

With the successful trial run of electric buses on the ecologically fragile Manali-Rohtang route, it is being expected that these battery operated buses will start plying by the next summer season as per the directions of the National Green Tribunal.

The trial run of the electric bus by Gold Stone Company has been successful on the Manali-Rohtang route and now Ashok Leyland is also expected to send its vehicle for trial run in December. “The BoDs of will soon take a call on whether to go ahead with the purchase of the electric vehicles or stick to the mandatory participation by three companies,” said Transport Minister GS Bali.

Though seven companies, including Mahindra, Tata, Kiti and the JBM, had shown interest in supplying electric buses, the bids have been sent in only by Gold Stone and Ashok Leyland. No automobile company in India is manufacturing battery-operated buses and these will have to imported from abroad.

He hoped that in case the BODs gave the go-ahead, then after completion of all the formalities, the state government should be in a position to have these vehicles running on the Manali-Rohtang route from the next summer season.

Tata was also keen to supply electric buses but since they had sought time to be able to meet the requirement, the Himachal Government is in no mood to delay the process any further in view of the NGT directives.

Since the laying of the CNG pipeline between Una to Manali by GAIL will take six months, the purchase of CNG buses has been put on hold till January 31, 2017. The HRTC has also decided to purchase 20 CNG buses with each vehicle to cost about Rs 60 lakh. The CNG Mother Station will come up in Una and the Daughter Station at Manali.