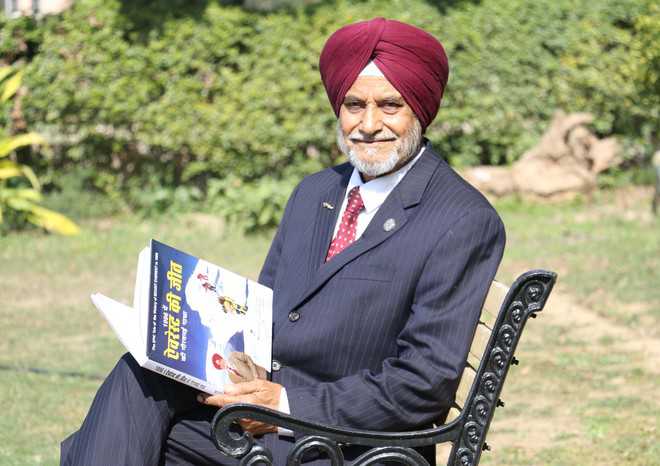 The 144-page book unfolds 78-day ITBP expedition to Everest through North-Col route in 1996 which terms as the toughest among 13 principal different routes to the summit.

The author hails from Model Gram, Ludhiana. He was a leader of the ITBP expedition that has the distinction of being successful leadership of the first ever climb of Mount Everest from the route of North-Col Tibet (China) side by Indian (ITBP) Expedition.

The May 1996 expedition by the ITBP to reach the top of Mount Everest was terribly hit by 1996 Mount Everest disaster, which in fact resulted in casualties of three members of expedition who were caught in the severe snow blizzard the Everest has ever seen.

The book show exemplary grit and commitment of the ITBP team that despite witnessing severe weather conditions and loosing three members, reached the summit and set an example for other climbers from all around world.

Book is in fact a gripping story on climber’s un­ending determination to win a mountain and of nature’s chilling riposte, resolute character.

Mohinder Singh (73) is a renowned climber and mountaineer award winner. Civil Engineer by profession, Singh retired as Commandant after having served in the ITBP for 35 years. He has done extensive trekking in the Indian Himalayas for continuous 25 years and also scaled Alps . He has been honoured with the coveted title “KHAN GRID” by government of Mongolia in 1995 under the Culture Exchange Programme between India & Mongolia.

He has been awarded more than fifteen commendations/citation, appreciations at different occasion of challenging/special assignments.