FAZILKA: After Fazilka residents held several agitations to save the ancient monuments of the town, the state government had granted the “heritage” status to three buildings by issuing separate notifications in October 2014. 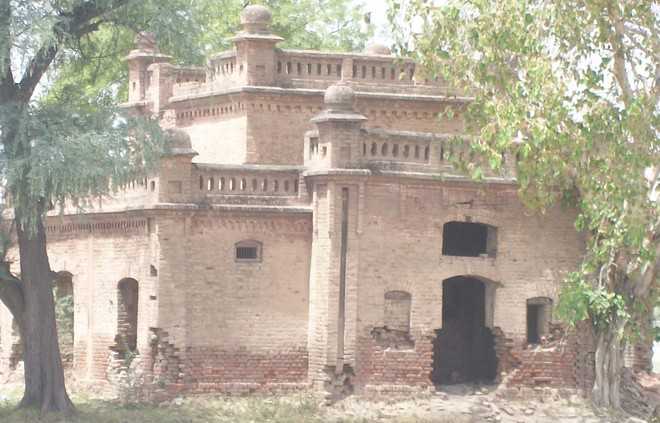 A dilapidated building of Raghuvar Bhawan in Fazilka. TRIBUNE Photo

After Fazilka residents held several agitations to save the ancient monuments of the town, the state government had granted the “heritage” status to three buildings by issuing separate notifications in October 2014.

The Culture Affairs, Archaeology and Museum Department (CAAMD), Punjab, had granted heritage status to Raghuvar Bhawan, the Goal Kothi and the Bangla.

It seems that the heritage status was accorded only on paper. “The CAAMD has failed to restore the structures and the government did not provide any amount for the maintenance of these buildings. The condition of the already dilapidated Raghuvar Bhawan is deteriorating day after day as most of its part has already collapsed,” said a local historian Lachhman Dost, who had spearheaded the agitation to get the heritage status for the buildings.

Raghuvar Bhawan, which was constructed in 1901 by a local philanthropist Seth Sunder Mal Bansal, is now on the verge of collapse. At present, the Raghuvar Bhawan is located on the Freedom Fighter Road and is a part of the Improvement Trust colony. Goal Kothi, also known as Bosworth Smith Recreation Club, at the local Government Senior Secondary School for Boys, was constructed during the British regime in 1913. The British officers including women used to carry out recreation activities in Goal Kothi. At present, the office of the District Education Officer (DEO) is being run in this building.

Historical building Bangla (bungalow) was constructed at he behest of British officer Vans Agnew in 1844 on the banks of the Sutlej river and the Badha Lake in lush green area of the town to keep vigil on various kingdoms under the British regime.

Deputy Commissioner, Fazilka, Isha Kalia said no funds had been received for the upkeep of the buildings.