When Freda Houlston confided that she was going to marry the handsome Sikh student she’d been seeing, her best friend, Barbara Castle, replied: ‘Well, thank goodness. Now at least you won’t become a suburban housewife!’ 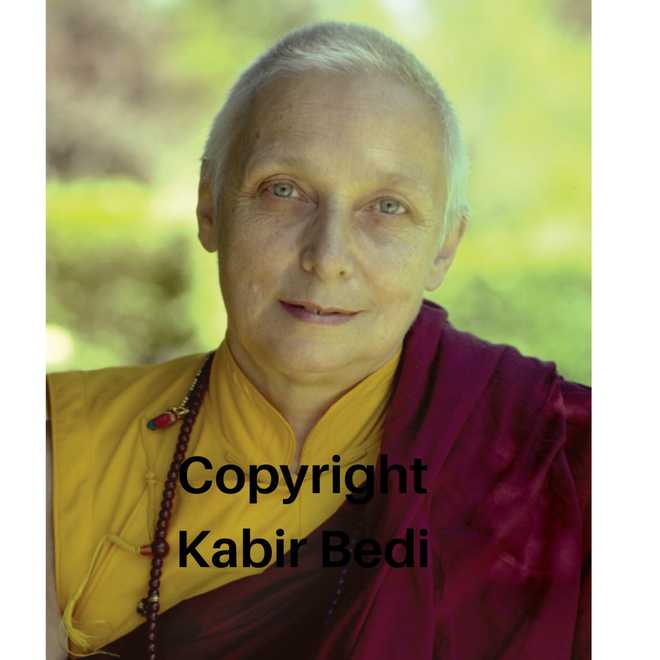 When Freda Houlston confided that she was going to marry the handsome Sikh student she’d been seeing, her best friend, Barbara Castle, replied: ‘Well, thank goodness. Now at least you won’t become a suburban housewife!’

Freda had refused to fit into that groove; in fact, she had refused to fit into any groove. She broke the mould not once, but repeatedly in the coming decades. An Englishwoman, she was jailed in India as an anti-Raj political detainee and later became a pioneering Tibetan Buddhist nun, says former BBC journalist Andrew Whitehead, who traces her life in a biography to be released this week.

Aptly titled The Lives of Freda: The Political, Spiritual and Personal Journeys of Freda Bedi, the book has been published by Speaking Tiger. It draws on the papers in the possession of her movie star son, Kabir Bedi, besides archives of The Tribune, for which Freda wrote regularly.

Freda, from a shopkeeper’s family in the English Midlands, fell in love with Baba Pyare Lal Bedi, an Indian fellow student at Oxford University. In the spring of 1933, they married at Oxford Registry Office, in spite of the disapproval of her family and disciplinary action by her college. From the moment of her marriage, Freda Bedi regarded herself as Indian and dressed in the Indian style, even though it was another year before she first got to set foot on Indian soil. By then, the husband and wife had edited four books about India’s claim to nationhood.

Freda grew up in an atmosphere of Fabian Socialism, when Laski and the London School of Economics dominated the intellectual life of the English-speaking people. Baba Bedi was a communist and militant nationalist, and also a champion hammer thrower. All these and a speech by Mahatma Gandhi at Oxford were to determine her anti-imperialist stand that she was to adhere to for the rest of her life.

In India, the Bedis were to become a noted left-wing couple. They set up home in Lahore where Freda decided to teach English at the Fateh Chand College, while Baba Bedi wrote, lectured and organised political activities.

She told a Tribune correspondent in May 1970: “For years we lived in a thatched hut in Model Town. There was no other way to live if one wanted to be active in politics. We could not have stayed with the ICS brother of my husband even though the doors of TD Bedi were open to us. We would only have been causing embarrassments. Nor could we lock ourselves in the small town of Kapurthala. The city of Lahore was the capital and there we spent some of our best years.”

In the years to come, she was to sway people with her oratory. It is said thousands thronged her meetings to listen to a white Oxford graduate denounce British imperialism. Gandhi was to later handpick her to be a satyagrahi.

Whitehead says during the World War II, both Freda and Baba Bedi were jailed for opposing the war effort and British imperialism. While Baba Bedi spent 15 months in detention, Freda spent three months as a political detainee (a satyagrahi) at Lahore women’s jail in 1941. Interestingly, the magistrate had given light imprisonment to the Indian satyagrahis. However, Freda got hard labour, probably to demonstrate strictness to the British who went against the establishment.

“She recorded her jail experiences in her first book: Behind Mud Wails. Some of these were stories of the inmates who had worked with her. The English language professor protested against the women jail being described as ‘female jail’. A mild elite agitation changed the name to ‘women’s jail’. Baba Bedi in the Deoli detention camp had a longer term to serve behind barbed wires,” The Tribune story had reported.

The Partition blizzard, which blew the inhabitants of old Lahore to various places in India, was to send the Bedis to Kashmir. That was to be her new battleground. The two became politically involved in Kashmir, living there for five years. They worked closely with Sheikh Abdullah. “Freda would dress in a burka to make contact with underground left-wing nationalists and enrolled in a women’s militia,” says Whitehead.

The next turning point in Freda’s life was to come in the 1950s when she encountered Buddhism while working in Burma for the United Nations. Whitehead says, in 1959, she persuaded Nehru to send her to help improve facilities for the tens of thousands of Tibetan refugees who had escaped on foot across the Himalayas.

“She set up a school for young incarnate lamas and in 1966 — without telling her children — she was ordained as a novice nun, Sister Palmo. She later took a higher ordination, and was perhaps the first woman in the Tibetan tradition (western or otherwise) to be ordained as a full Buddhist nun. She arranged for two young lamas to study at Oxford and persuaded her guru, the Karmapa Lama, to reach out to the West, accompanying him in 1974 on a pioneering rock star-style five-month tour of North America and Europe. She has been described as the seed of Buddhism in the West,” he says.

Freda died in Delhi in 1977 aged 66, bringing to end her very fruitful political, spiritual and personal journeys. Baba Bedi too took the spiritual path in later life and died in Italy in 1993.

Freda Bedi’s biographer Andrew Whitehead says her weekly column for The Tribune, From a Woman’s Window, was one of the first journalistic endeavours by and for women in India. He says it was hugely innovative in tackling issues such as child birth, breastfeeding and women’s clothing and career choices. At the end of 1943, the paper sent Freda to Bengal to report on the devastating famine, and her journalism was published in 1944 as a book, Bengal Lamenting, which had a very striking cover designed by Sobha Singh.

Biographer Andrew Whitehead says he saw in Freda a powerful personal story of a woman who broke the mould, refused to be constrained by barriers of gender, race, religion and identity, and who lived such a full and influential life. In her, he also saw a bit of himself. “I’m also from a northern England town. I, too, went to Oxford, I married an Indian, for a while I brought up my children in Delhi, and I have been engaged with Kashmir and the aspirations of its people. There are also very important differences — I am not a Buddhist and indeed I am not religious.” This difference apart, her spiritual journey is the most successful of her forays for Whitehead. “Buddhism proved to be a natural spiritual home for her. And she proved to be very effective in helping Tibetan Buddhism adapt to exile and encouraging her guru — a high lama, the 16th Karmapa Lama — to reach out to the West. She is remembered most keenly and fondly by Tibetan lamas and by western adherents of the Tibetan strand of Buddhism.”

My mother, Freda Bedi, was a truly compassionate person. Like my father, Baba Bedi, she lived for the causes she believed in: India’s independence, social welfare in villages, rehabilitation of Kashmiri and Tibetan refugees, finally becoming a Buddhist nun. Through it all, she raised a family — my brother, sister and me — with all the love and care a mother can give. February 5 was my mother’s 110th birth anniversary. I bow with love and reverence to her memory, and thank her for all she gave me. — Kabir Bedi | Actor, Freda Bedi’s younger son