SRINAGAR: Almost 10 months after the devastating September deluge, the J&K Government has taken no major initiative to mitigate the looming flood threat even as a flood alert was sounded in the region on Wednesday —- second time in the past four months. 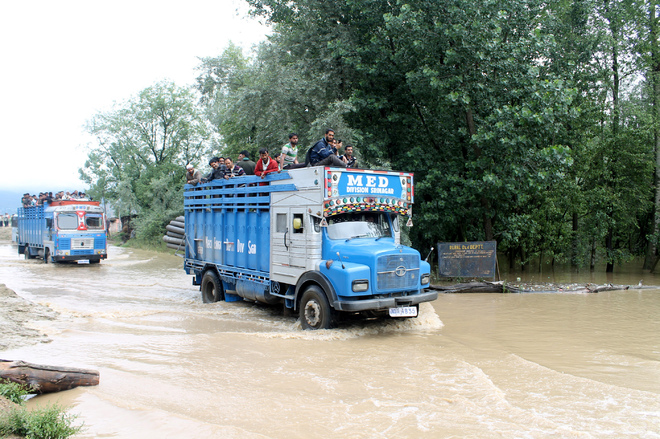 Almost 10 months after the devastating September deluge, the J&K Government has taken no major initiative to mitigate the looming flood threat even as a flood alert was sounded in the region on Wednesday —- second time in the past four months.

Nothing much has so far been done by the government for dredging and desilting the Jhelum, flood spill channel and other major tributaries of the river to clean up its base and increase the carrying capacity of the water bodies. The carrying capacity of the Jhelum has reduced considerably due to the September deluge last year as tons of silt was accumulated in the water bodies.

“It is disappointing to see that even a day or two of heavy rain triggers a flood alert in Kashmir. The authorities concerned seem to be only waiting for doles from Delhi to start massive dredging or desilting to mitigate the floods. There seems no priority before the Mufti government on how to mitigate the flood threat on a war footing,” said Hilal Ahmed, a shopkeeper at the city centre Lal Chowk.

“The officials of the Irrigation and Flood Control Department should be punished for not desilting the Jhelum on a war footing after the last year’s floods,” said another Srinagar resident.

Kashmir was hit by the worst-ever floods last year and the deluge sank nearly 70 per cent of Srinagar city. Not only Srinagar, but the flood also submerged nearly 800 villages in the state for more than two weeks and left nearly 300 people dead.

“We need to do dredging of the Jhelum, flood spill channel and all tributaries, both horizontally and vertically, to reduce the risk of the floods,” said Khursheed Ahmed Parrey, an expert on remote sensing and groundwater, who currently teaches geology at SP College in Srinagar.

“If the river widening from Sangam (south Kashmir) to Srinagar is expedited, it will increase the carrying capacity of the Jhelum to a large extent and decrease the threat of flooding,” Parrey added.

The Jhelum spans over 180 km and originates from south Kashmir’s Verinag. It is joined by at least a dozen tributaries across Kashmir. In south Kashmir, the Jhelum tributaries Lidder, Vishaw, Bringi and Rambiara, in central Kashmir, Ferozpour, Sukhnag and Sindh and in north, Pohru, Ningli, Khursu, Erin and Madhumati also need immediate desiltation to mitigate the looming flood threat.

An official of the Irrigation and Flood Control Department said that after the last year’s flood, dredging was carried out at a few spots.

“We can only start dredging on a large scale when the Union Government releases funds under the Jhelum conservation project approved by it,” the official said.

The Irrigation and Flood Control Minister said the Union Government had approved funds for massive dredging of water bodies. “We will be issuing a tender in a few days and I hope the dredging should start on a war footing to expedite the work in view of the looming flood threat in Kashmir,” the minister said.