PITHORAGARH: Forest animals and reptiles are dying in the Kumaon region following forest fires and the Forest Department is helpless in extinguishing the fires due to shortage of workers and inadequate preparations as the fire season started a month before expected this year. 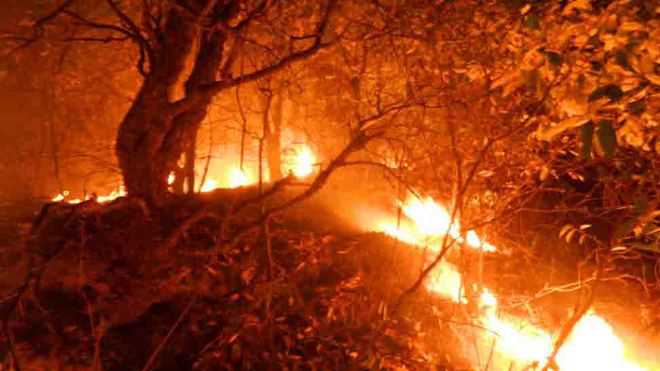 Forest animals and reptiles are dying in the Kumaon region following forest fires and the Forest Department is helpless in extinguishing the fires due to shortage of workers and inadequate preparations as the fire season started a month before expected this year.

According to sources from Bageshwar, all six ranges of forest division in the district are under fires which is causing loss worth crores of rupees to forest assets.

Forest officials confirmed that animals were running towards the human settlement due to these fires which has engulfed all six ranges of Kapkot, Kanda, Rima, Banlekh, Garur and Kausani. “Though we have prepared the plan, due to lack of workers, we could not do so as all our employees are above 55 years of age and cannot be deputed in interior ranges,” said MB Singh, DFO, Bageshwar.

According to reports reaching from Chukhuria in Almora and Thal and Berinag ranges of Pithoragarh district, forest fires have engulfed nearby forests and started reaching villages due to lack of efforts made to extinguish these.

“We had to extinguish these with our own efforts last night as it had reached near a residential area and two hay stores burnt, besides a scooter parked near the home,” said Joga Ram, a villager from Bhattigaon village of Berinag.

While sensitive wildlife activists have claimed the a number of wildlife species are destroyed in the fires, the Forest Department has shown no concerned to protect it.

“At present, we are concerned only to save surface forest covers and have no plans to save wild lives. We are increasing the number of crew stations only to safe forests from fires,” said Prem Kumar, Conservator of Forest in the Kumaon region.

Reports of forest fires reaching near residential areas have come from Banbasa, Jauljibi, Didihat, Ranikhet, Tanakpur and Baram areas where the fires have destroyed not only plants, herbs and shrubs but also insects and mammals and reptiles.

“The department should constitute a separate cell to monitor the losses of wild animals and should take measures to save wildlife from this fires that engulf the region every year, killing uncounted number of wild species,” said Kunwar Damodar Rathod, a Vrikshmitra awardee and environment worker in Didihat of Pithoragarh district.