SHIMLA: The Himachal government today issued fresh instructions to all the Deputy Commissioners to convene monthly meetings of all the concerned officers to review the action taken by them against illegal mining. 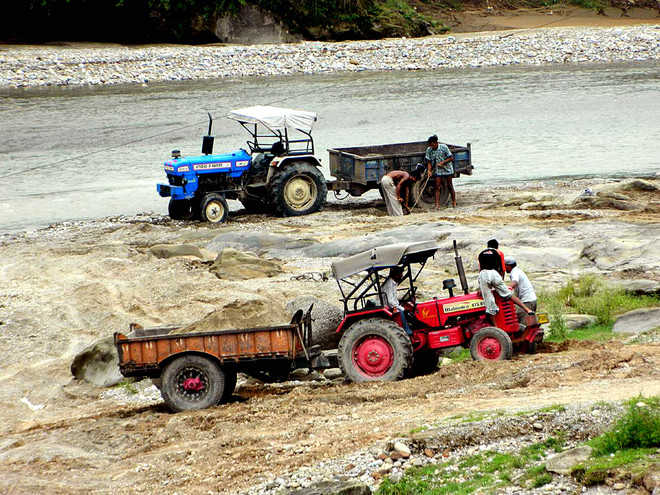 Illegal mining under way in a rivulet in Kangra district. File photo

The Himachal government today issued fresh instructions to all the Deputy Commissioners to convene monthly meetings of all the concerned officers to review the action taken by them against illegal mining.

Disclosing this a spokesman of the state government said here today that the DCs have been asked to constitute committees of Public Works Department, Revenue and Forest Officials since most of the routes leading to the river beds have been carved out illegally on the forest land and government land and the mineral so extracted is being stacked on the acquired width of the PWD roads.

He said the Deputy Commissioners have also been directed to ask the Himachal Pradesh State Electricity Board officials to ensure that metering of the crusher units be done at the level of transformers/ sub-stations to eliminate the possibilities of theft of electricity.

Moreover, the DCs would also ensure thorough surprise inspections that no diesel generated sets are used illegally by crusher owners, he said adding that a sub divisional level flying squad under the chairmanship of concerned SDM has also been constituted to conduct raids against illegal mining, he added.

To decentralize the powers under the Mining Acts and to take cognizance of illegal mining activities, the government has delegated powers to 39 officers and officials of various departments.