THE Harappan site at Rakhigarhi, which is proving to be the most remarkable window to the life and times of the Indus Valley civilization that flourished over 5,000 years ago or beyond, has revealed Rakhigarhi was the hub of trade and culture. 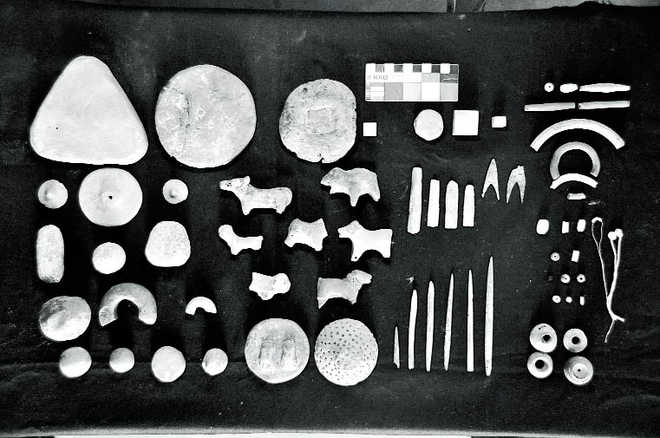 The artefacts recovered from Rakhigarhi, near Hisar, tell of rich cultural traditions during HarappAN civilization.

THE Harappan site at Rakhigarhi, which is proving to be the most remarkable window to the life and times of the Indus Valley civilization that flourished over 5,000 years ago or beyond, has revealed Rakhigarhi was the hub of  trade and culture. This is evidenced by the discovery of objects that link them to the expertise of local people.

The excavations and subsequent study of the findings have unfolded that lapidary (relating to the engraving, cutting, or polishing of stones and gems) was most developed handicraft in this township, considered the centre of a large-scale industrial activity about 5,000 years ago. The ongoing excavation being conducted by the Deccan College Pune and the Haryana Archaeological department have also retrieved a large number of beads from the site.

An archaeological survey of India (ASI) report too pointed out that a huge number of stone beads and beads of metal, including gold, indicated that Rakhigarhi was the biggest bead manufacturing and trading centre of the contemporary world. This also shows the social and economic organization of local people. Rakhigarhi has yielded a large collection of beads made of stones, semi-precious stones and even metal like gold.

The team of archaeologists found gold beads at the habitation site number 2 besides some beads from the graves where skeletons of humans were retrieved at site number 7.

Shish Pal Chalia, assistant conservator, Haryana archaeological department said that stone beads have been recovered from all the Harappan sites. “But the volume of beads at Rakhigarh indicated that this could have been a centre of manufacturing. The raw material was being brought from other parts, including Afganisthan, Baluchistan and even from Gujarat. Advanced handicraft technique of local people was used in shaping these stones in different shapes and sizes for trade purposes,” he said.

Dr Amarendra Nath, former Director, archaeology, in his report to the ASI submitted in December 2014, on Rakhigarhi excavation wrote: “We found a well-established bead manufacturing factory having thousands of bead rough-outs, waste flakes and cores, tools and implements and bead polishers. All these things were placed on a mud brick floor in a very specific manner. It indicates that the bead makers of Rakhigarhi present an example of highly advanced skill and craftsmanship.”

The ASI excavation had retrieved 11421 beads in the last 13 years from 1997 from Rakhigarhi. Nath stated that steatite was the most popular material for making beads as almost 80% of the beads are made of this stone. There were also objects made of faience (tin glazed pottery) and semi-precious stones like agate, amozonite, carnelian, chalcedony, jasper, lapis lazuli ivory, bone shells, copper, gold and terracotta.

The ASI report prepared by Prof Nath reveals that the beads of steatite are mostly disc and cylindrical shaped made by rolling the paste on a thread. They are very hard and were often found joined together. Other shapes of steatite beads include discular, biconvex , tabular, etched. Bead of faience were made in colour but they had mostly faded their hues.

The semi-precious stones need specialized craft for bead making. It was considered highly prized stone due to colours. Carnelian beads were etched with various patterns like eye pattern, line pattern, circle pattern, eight figure pattern and chevron pattern. The carnelian beads with figure of '8' seemed to be most popular and etching was done with the help of plant juice for white colour design on red surface of stone. The researchers opined that long barrel carnelian beads were manufactured to export to Mesopotamia.

Different varieties of colourful jasper beads were found in mostly drum shape and well marked. Lapis lazuli beads shaped in short cylindrical and thick disc were recovered from the site. This raw material for the beads was imported from Afghanistan.