Hopefully Centre will not provoke us: Uttarakhand HC

NAINITAL: Adding to the Centre’s discomfiture, the Uttarakhand High Court today issued a veiled warning, hoping it will not provoke the court by revoking the President''s Rule imposed in the state till a verdict is delivered on the petition challenging its imposition. 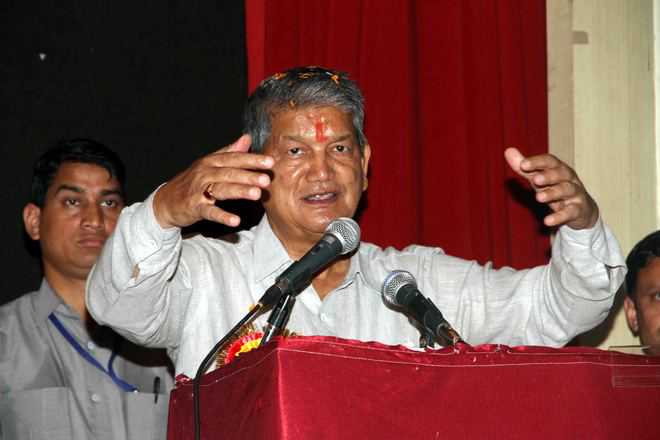 The HC was hearing arguments on a petition filed by former Chief Minister Harish Rawat and related pleas challenging imposition of the President’s rule in Uttarakhand.

Adding to the Centre’s discomfiture, the Uttarakhand High Court today issued a veiled warning, hoping it will not provoke the Court by revoking the President's Rule imposed in the state till a verdict is delivered on the petition challenging its imposition.

Earlier in the day, the court observed that the legitimacy of the President’s decision to suspend the Assembly is subject to judicial review as even he can go wrong.

“We hope they will not provoke us,” a bench of Chief Justice KM Joseph and Justice VK Bist said after senior advocate Abhishek Manu Singhvi raised the apprehension that President's Rule might be revoked before verdict is pronounced or even reserved.

Singhvi, who appeared for former chief minister Harish Rawat in his plea challenging President's Rule, expressed the fear after the Centre said that the Attorney General's statement of April 7, that nothing with regard to 356 will be done till April 17, has "expired".

Additional Solicitor General (ASG) Tushar Mehta did not confirm whether any decision with regard to revocation of President's Rule has been taken by the Centre.

Singhvi said President’s Rule should not be lifted before judgement is reserved or pronounced and the "opposition" should not be invited to form a government as this would render the plea infructuous.

He also said the Centre cannot resort to such tactics to force the court to deliver a verdict quickly.

The court also took a "serious view" of the fact that though the Centre had alleged that the Speaker of the House had kept the disqualification complaint against BJP MLA Bhim Lal Arya pending, in reality the complaint against him was filed only after President's Rule was imposed.

"Why was the complaint filed on April 5 after President's Rule was imposed?  We were thinking about why the Speaker has double standards (that he disqualified the nine rebel Congress MLAs but kept the complaint against Arya pending).

"This is terrible. You are making such terrible allegations (against Speaker). Is this how Government of India functions? What do you (Centre) have to say about this? This is not to be taken lightly as that (Speaker's conduct regarding disqualification) was also the basis of President's satisfaction. We are taking a serious note of this," the bench said.

Mehta said he would need to take instructions on it and would tell the court tomorrow after which the bench listed the matter tomorrow for this clarification.

The bench is also likely to reserve its verdict on Rawat's plea against President's Rule tomorrow.

During the second half of the day's proceedings, the court also directed a query to the petitioner, Rawat, that looking at his conduct "why the discretion (of Article 356) should not be exercised".

"Looking at your (petitioner) conduct, why discretion (of imposing 356) should not be exercised?"

The court was referring to the sting operation which allegedly pointed to Rawat's involvement in horse-trading.

To this Rawat's counsel, Singhvi, said the sting was an "alleged solitary example" which "bordered on entrapment".

‘People can go wrong, be it President or judges’

Referring to the NDA government's argument that the President took the decision to impose Article 356 of the Constitution in his "political wisdom", a bench of Chief Justice K M Joseph and Justice V K Bist observed, "People can go wrong, be it the President or the judges."

The court also went on to say that "Legitimacy of inference drawn by President from the material placed before him is open to judicial review."

This observation was made after the Centre contended that the President's understanding of the material before him would be different from that of the court.

The government's contention came after the bench said that from the reports sent by the Governor to the President, regarding the situation in the state, "what we have understood is that everything was processing towards a floor test on March 28."

The high court, during the hearing, also noted that the Governor in his reports to the President never mentioned that 35 MLAs sought division of votes.

"Governor has to be personally satisfied. He has not recorded his personal satisfaction that 35 MLAs had sought division on the floor of the house," the court said and added that his reports do not say that the nine rebel Congress MLAs had also sought a division.

It also said that there was "absolute absence of material that would create an apprehension in the mind of the Governor" that President's rule needs to be imposed.

"So how did the Government of India arrive at the satisfaction that 35 stood up? From Governor's reports?" the court asked.

"Governor's letter of March 19 to the President does not mention that 35 MLAs had sought division of votes. That is conspicuous by its absence. It is absolutely crucial," the bench said.

To this the Centre said that on March 19 the Governor did not have all the details.

During the arguments, the court asked Singhvi what would happen to the Centre's March 30 ordinance regarding expenditure of the state if Rawat's plea is allowed.

Singhvi said the ordinance would remain in force till the petition challenging it is decided.

He also said that even if the ordinance is struck down by the court the actions taken under it will remain.

Presenting his final arguments, Singhvi said Article 356 cannot be the "panacea" for horse-trading as then what would be the use of the "long judgements" by the Supreme Court holding that "floor test is essential".

He also argued "there is nothing" like the Centre's "concept of auto-falling of a government if money bill fails".

The senior counsel said failing of money Bill would only be a "trigger" and a motion of no-confidence would have to be moved to remove the government.

He said that none of the Governor's reports to President recommended imposing of Article 356 or said that the constitutional machinery had failed in the state "but Central government relies on these reports and imposes President's rule".

Singh raised the question whether a solitary instance of a Speaker denying a division would be sufficient to impose President's rule.

He queried "what was the unearthly hurry" in imposing President's Rule on March 26 and questioned why the Centre could not wait till the floor test was held on March 28.

He contended that Article 356 was imposed in a "casual manner" in the instant case.