How use turned to abuse in Punjab

Drug addiction is not a Punjab-specific problem, though social, cultural and economic patterns over several years encouraged its proliferation because of lack of discouragement. 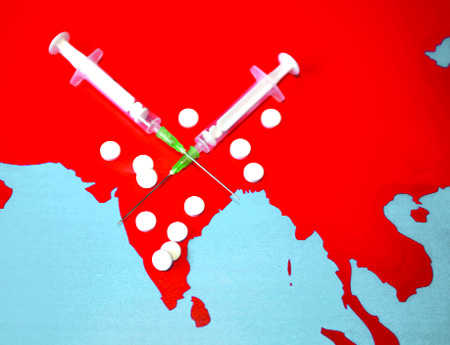 Drug addiction is not a Punjab-specific problem, though social, cultural and economic patterns over several years encouraged its proliferation because of lack of discouragement. It is an affliction that’s been allowed a firm footing in the border state, becoming almost an accepted way of life as those who could make a difference looked the other way. Now that the political class does seem to be looking at the mess, is it the right way?

Drug use — primarily the intake of opium — had been part of the social and cultural compass long before Punjab was partitioned and then divided. That said, drug abuse was always considered an exception, not the rule — it was lampooned in comic characterisation and looked down upon. “In folk literature, songs and movies, we always had a drug addict in the plot. But he was never the hero. He was always made fun of. Those who took even liquor avoided meeting the parents and even one’s spouse,” says Dr Gurbhajan Gill, former head of the Punjabi Sahit Akademi. “It was even considered healthy, and people in the Malwa belt still feel small doses of opium are good for health,” he points out. “The influence also comes from the prevailing culture in neighbouring Rajasthan where opium was, and still is, served like paan in weddings.”

The use increased with the advent of the Green Revolution in the state. More work in the fields brought more labourers and the demand of poppy husk and opium increased manifold. Dr Gill recalls how it was common for big farmers to supply opium and poppy husk to labourers, “since it served like machine oil”. Similarly, industrialisation in the country opened more routes for Punjabi truck drivers and they took to poppy husk and opium as they felt it helped them in driving for longer hours.

It was the transition from poppy husk and opium and its usual suspect users to the lethal heroin or smack, and later synthetic drugs, that rang alarm bells, says Dr Rajiv Gupta, who heads the Punjab Psychiatrist Association. Experts trace it to the heavy flow of heroin through the then unfenced border with Pakistan in the 1980s. Narco-terrorism’s push came after 2000, and the impetus was in 2007 when China and Japan cracked down on heroin smuggling and India emerged as one of the biggest markets. The entry point: Punjab.

A study by Prof PS Verma of the Chandigarh-based Institute of Development and Communication points out how India was sandwiched between the “golden triangle” of drugs — Vietnam, Myanmar and Thailand — and the “golden crescent” of Iran, Afghanistan and Pakistan, where opium was produced and smuggled. The year 2007 saw a 10-time increase in the recovery of heroin in Punjab.

With more heroin, popularly known as chitta or white powder, being pushed into the state from across the border and trucks full of poppy husk and opium reaching the state from Rajasthan and Madhya Pradesh, the trade assumed large proportions. It was Maqboolpura, a congested colony in Amritsar, that first pricked the conscience of the region when The Tribune in 1999 reported about the death of 30 householders in three years who had fallen prey to addictive substances and called it the “locality of widows”.

Over 3.3 lakh addicts were registered for treatment in various de-addiction centres across Punjab from June 15 to December 15 last year as part of the massive drive against drug abuse. As many as 22,700 jail inmates were also provided treatment, as the police arrested 45,000 persons  for narcotic smuggling or possession in 2014 alone.

Deadly drugs like heroin and synthetic tablets have made it into an organised crime, consuming lives, destroying families and damaging the image of a people and a state. Add to that the growing evidence of pharmaceutical opioid abuse where addicts are graduating to injecting formulations with opium-like qualities (hence called opioids). Among pharma opioids are buprenorphine, pentazocine and dextropropyxyphyne. Over-the-counter cough syrups like Corex and Benadryl too are much in demand.

Does easy supply lead to addiction, or does the demand result in increased supply? Why did Punjab so easily fall into the drug trap?

Studies point to some striking aspects of Punjab’s drug addiction problem. It has a predominant rural context and the users are relatively affluent, unlike in the rest of the country. The drugs used are mostly injectable, which are commonly associated with urban settings.

The intensity and extremity of the addiction too is a unique Punjabi occurrence. Experts explain it in terms of the deep-rooted cultures of consumption and masculinity, the declining growth rates of the rural economy, the influx of migrants, the impact of unemployment on educated rural youth, and the culture of aspiration and expectation, which quickly swerves to depression when things don’t fall in place.

Research studies also point to the failure of Punjab’s industrial sector to absorb the increasing number of employable youth from rural areas, and the cultural attributes that inhibit educated youth from taking up certain jobs, especially in the farm sector. There’s also a clash between unemployment and the culture of aspiration among the many affluent young men in rural Punjab, who are at the centre of the problem. Frustration, boredom and laziness are all experienced simultaneously, as an expert puts it. Those who can, migrate; those who are unable to can be easy prey.

No one exactly knows the extent of the drug problem in the state; the varied figures that are often quoted are based on sporadic studies and anecdotal instances. When Congress vice-president Rahul Gandhi remarked during an election rally in 2012 that 70 per cent of Punjab’s youth were under the influence of drugs, the figure may have been questionable, but what was relevant was the start of a debate. Now that it’s taken shape of a political slugfest, the core issue of the huge battle against drugs is still lost in the war of words.

There's a perception in Punjab that the politicians of all hues and even the police are beneficiaries of the drug trade, and are part of the problem. Retired DGP Shashi Kant Sharma went on to claim that the new narco-political elite used drug money to fund elections.

Punjab Police have tried to shed the image with huge recoveries, busting of drug gangs and sustained crackdowns. But a senior police officer points to the difficulty in letting go of notions: “More drug recoveries show the security agencies are more alert and serious about the issue, but the media and the Opposition say it means an increase in smuggling and higher consumption!”

The politicians have chosen the easy way out: sparring and what sounds more jarring, dharnas. The Shiromani Akali Dal organised one against the Border Security Force, the Bharatiya Janata Party plans “4,500 rallies” and the Congress has one lined up on January 22.

The Congress claims the drug smuggling went up when the Akalis came to power in 2007 and is still increasing, while the Akalis stress that they were the ones who launched a campaign to “save the youth of the country as Punjab was just a transit point for smuggling and not the main consumer”. Both the parties forget how satirist and Aam Aadmi Party MP from Sangrur Bhagwant Mann based his entire election campaign on drugs and won a famous victory.

It was when an arrested drug lord named Cabinet minister Bikram Singh Majithia as having a role in the flourishing drug racket, a claim flatly denied, that the politicking reached a feverish pitch, but the issue confronting Punjab was again ignored.

‘Denial is the biggest mistake’

The first and foremost priority  should be to avoid the denial mode on drug addiction by everyone, feels Chandigarh-based Institute for Development and Communication Director  Dr Pramod Kumar.  “There’s an abdication syndrome prevailing among all. Unfortunately, the debate has been reduced to sermonising that who should do what.” he says.

“The demand of vice is a bigger problem than the one who lures you to bad habits. We must check the supply in any forceful way we can, but the focus should be the recipient, the one who is seeking the supply. For that, the role of each one of us is important. I would put the role of parents on the top,” he adds.

Dr Kumar says it must be acknowledged that the debate on drugs, the politics and the counter-action may be entirely new or new in a different way, but drug intake was always present in the history and culture of this region.

“The enormity of a problem is not the function of numbers. Even if one person is taking drugs, it is a problem. Sadly, drug abuse has emerged as a new currency in politics,” he opines.

Earlier, the use of drugs was the currency to woo voters, now all politicians are trying to harp on preventing drug abuse as the way to woo voters — Dr Pramod Kumar, Director, Institute for Development and Communication