In harmony with heritage

If you are a lover of heritage and cultural tourism, Bath, located nearly 100 miles from London, is a place you must have on your bucket list. 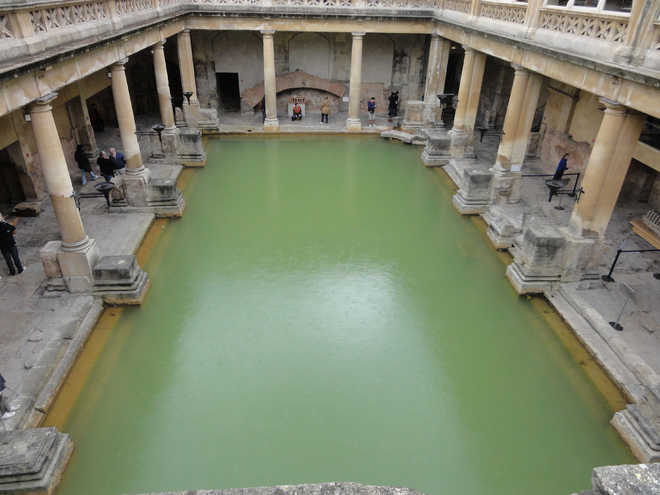 Healing powers: The water, rich in about 42 minerals, was said to have medicinal properties

If you are a lover of heritage and cultural tourism, Bath, located nearly 100 miles from London, is a place you must have on your bucket list. Roman ruins, Georgian architecture, legacy and tradition are aplenty in this city situated in the valley of the river Avon. Declared a Unesco World Heritage Site in 1987, the city, intrinsically associated with the evocative ruins of the 2000-year-old Roman baths, has close to four million visitors a year.

A stupendous piece of Gothic architecture and one of the finest in the west of England, the Bath Abbey is one of the major attractions of the city. Constructed using the trademark, locally available honey-coloured Bath stone, the church dates back to the seventh century. It was renovated and rebuilt multiple times between the seventh and 12th centuries. A landmark that has great tourist as well as religious significance, this Anglican parish church is renowned for its beautiful music in addition to its perpendicular style of architecture, stained glass windows and fan vault.

Bath was founded as early as 60 AD under the name Aquae Sulis when the Romans built baths and a temple in the valley of Avon. A place of extreme historical significance, the Roman Baths is a complex that houses the Roman temple, Roman Bath house, the sacred spring and the museum. It is the only place in the United Kingdom where hot water from natural springs beneath the city come to the surface. This natural phenomenon was discovered much earlier (around 836 BC), and while the source of the water remains a mystery, there are theories that suggest that it could originate in the nearby Mendip Hills. The water, rich in about 42 minerals, was believed to have medicinal and healing properties.

The first temple at this site was built by the Celts who dedicated the same to Goddess Sulis. This name continued even after the Roman invasion and hence was called Aquae Sulis, which translates to the waters of Sulis. While the original temple was built around 60-70 AD, the bathing complex was built over the next 300 years. The actual baths are below the ground level and have undergone several modifications from being an irregular stone chamber to a wooden barrel-vaulted building that housed the hot, warm and cold bath. The King’s bath was built in the 12th century beneath which is a reservoir built by Roman engineers. The Queen’s bath was built in the 16th century.

The Roman temple that stands at an elevated level is synonymous with the powerful image of the Gorgon’s head. The museum is a treasure house of objects that depicts the life and times of the residents and pilgrims of Aquae Sulis. Vessels, gemstones, tools and other objects used by the Romans, along with informative and colourful displays depicting the Roman society make the museum insightful. The audio guide tour is the best way to explore this wonderful heritage site.

A quaint city that is also the backdrop of several Jane Austen novels, Bath offers diverse experiences. Apart from the Jane Austen centre, which chronicles her life here during the early part of the 19th century, one can explore several other heritage buildings and museums like the Museum of Bath Architecture and the Holburne Museum. All these sites together take us back to the history and culture of the city of Bath.