In the netherworld of Nazi crimes

One of the most moving and poignant tributes to the victims of Hitler’s final solution is the Holocaust memorial in Berlin. 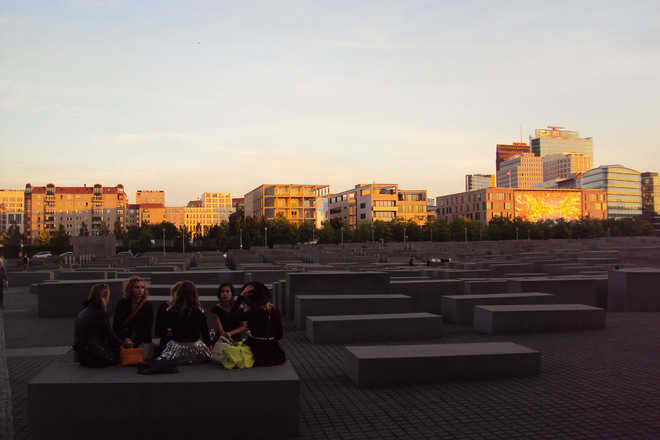 A reminder of chaos: The concrete slabs of different heights at Field of Stelae seem like a cemetery Photo by the writer

One of the most moving and poignant tributes to the victims of Hitler’s final solution is the Holocaust memorial in Berlin. Located along the avenue that connects the Brandenburg Gate to Potsdamer Platz, the memorial comprises a playground-size sloping field dotted with concrete slabs of different heights, which remind one of a cemetery. This is known as the Field of Stelae. The rows and rows of those flat, grey structures rising from the ground evoke feelings of chaotic disorder and mourning.

Steps lead to the basement museum. It feels like one is descending into the netherworld of Nazi crimes. A telling quote by Primo Levi solemnly greets one at the entrance “It happened, and therefore, it can happen again.”

The chilling purport of that sentence is unsettling in this subterranean ambience as enlarged photographs of six victims, of different sexes, ages and nationalities look out at visitors, their eyes and expressions reflecting normalcy, with no hint of what gruesome fates they were to meet soon after. That moment onward, the Holocaust becomes disturbingly personal.

The first chamber, known as the Room of Dimensions, unnerves one further. The backlit floor beams blown-up portions of letters, diary entries, poems and last thoughts scrawled by various victims. From 12-year-old Judith Wishnyatskaya to Hungarian poet Miklos Radnoti — in stilted sentences or lucid verse — profess love for their near ones, wait resignedly for their turn to die, and yet hoping against hope, experience the uncertainty and terror of facing death.

The next chamber, the Room of Families, takes one into the pre-Nazi world of 15 Jewish families from different countries, which perished in the Holocaust. Sepia-coloured photographs show lifestyles, family occasions — the men and women dignified, secure, alive and smiling — while personal documents and other images outline their backgrounds, ancestry and belongings, brief life-stories or information on each individual member and how the Nazi killing machine finally got them. Whether it’s the Haberman family of modern-day Ukraine or the Grossmen family of Poland, one stares at their albums, at their ordinary lives and shudders to comprehend how devastatingly unfair life can be. Thousands of families like theirs have been wiped out just because of the fatal accident of their birth, during the era of a madman.

Walls of black screens await visitors in the adjacent chamber known as the Room of Names. Azriel Zaks, Perl Becker, Golda Levi ... the names flicker one after the other, with brief biographies of every Holocaust victim. If one sat there to view all names thus, it will take more than six years to see the complete list. This chamber strives to remind us that every victim was a real, flesh and blood person, not some anonymous death statistic, just to be counted then forgotten forever.

The final chamber, the Room of Sites, outlines the geographical distribution of the infrastructure of organised murder. The Nazis set up nearly 220 death camps across central and eastern Europe. Unique footage, paperwork and photographs from these camps are exhibited here, which send a chill down one’s spine as one sees the sheer banality with which evil deeds were carried out, like routine tasks — factories of death operating with sickening efficiency. The disconcerting question that bothers visitors is what kind of a twisted atmosphere prevailed that a camp officer felt the need to boast casually in a letter to his wife, that he had personally put to death some women and children. In the very next paragraph, he comes across as a loving parent and doting husband. It freaks one out beyond measure.

As one emerges into the Field of Stelae again, the question that niggles is whether the world has learnt anything at all, because visceral hatred — religious, ethnic, ideological — thrives even today. Can it happen again, as Levi, so presciently cautioned?