They carry Indian names but don’t look Indian, They speak no Indian language but are Hindus. 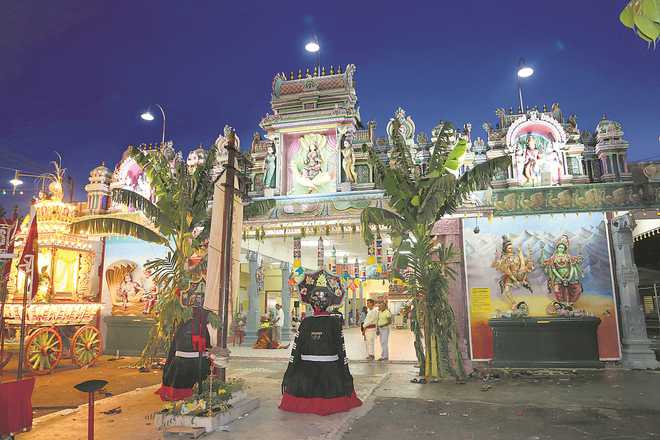 They carry Indian names but don’t look Indian, They speak no Indian language but are Hindus. Most do not have a familial connection to India yet their race is listed as Indian on their identity cards. These are the little known Chettis of Melaka (formerly Malacca) in Malaysia.

Melaka, with its sheltered harbour and strategic location, became a major trading hub in the heyday of the spice trade attracting Indian traders to the Malayan archipelago. Once business was concluded many traders from the Coromandel Coast waited in Melaka for the winds to turn favourable so that they could head home.

Away from their families for several months at a time, these men began to develop relationships with local Malay, Javanese and Chinese women. Many settled down in Melaka, started families and became part of the local community. Thus, around the 15th century, an entirely new community known as the Chetti Melaka was born.

There are several theories about the origin of the word ‘Chetti’. Some historians believe that it evolved from the word ‘shetti’ which in Tamil means merchant or trader. Another belief is that the traders from Gujarat, who also had trade ties with South-East Asia, called their business heads ‘seth’ and Chetti is a variation of ‘seth’. Whatever the story, the name Chetti has stuck.

Unaware about the place their forefathers originally came from in India, the Chettis settled down at Kampung Chetti (Chetti village in Malay) at Gajah Berang in Melaka. By 18th century the community had become so influential that Dutch colonisers assigned land to them in 1781.

In the same year they established the Sri Poyatha Venayagar Moorthi Temple, which is the oldest Hindu temple in Melaka, Malaysia. Kampung Chetti continues to be the spiritual and cultural base of the Chettis and this is where they gather to celebrate all their major festivals.

Today, only 20 to 30 families live at Kampung Chetti. Many members of the community migrated to Kuala Lumpur, Penang and Singapore in the early part of the 20th century in search of greener pastures. An estimated 5,000 Chettis live in Singapore at present.

The few written records about the Chettis are untraceable, hence their history  largely remains undocumented. A small museum at Gajah Berang has been devoted to the community that houses its  artefacts.

The Indian Heritage Centre at Singapore, in order to celebrate the culture and legacy of the Chettis, recently held an exhibition and cultural fest along with the Peranakan Indian (Chitty Melaka) Association, Singapore, to showcase this ‘scattered and underexplored’ community.

According to Nalina Gopal, curator, Indian Heritage Centre, “The story of the Chetti Melaka is captivating, and is a wonderful example of how  they have absorbed, adapted and mixed together different cultures to create something new and special.”

The Chettis bridged many different communities and survived despite intermarriages. When a non-Chetti bride joined a Chetti household, though she embraced Hinduism but brought with her the cultural practices, food habits, language and traditions of her maternal home.

The Chettis, in appearance, have a mix of Indian, Chinese and Malay features. Traditionally, men dressed in Malay checkered sarongs (wrap-around lungis) and shirts. The women wore a batik sarong and embroidered blouse called kebaya. Their footwear was intricately embroidered. The ubiquitous vermillion dot on their foreheads immediately identified them as Hindus in spite of their foreign looks and dressing style.

During weddings, the grooms wore traditional South Indian clothes while the brides dressed in elaborate Chinese or Malay clothes, according to their ancestry. Marriages were conducted according to Hindu tradition though.

A taste of the familiar

Chettis are meat eaters but do not eat beef or pork, in deference to their Hindu beliefs, and close marital relationships with the Muslims.

Their mixed parentage has made the Chettis quite tolerant and open-minded. It is common to find Hindu, Christian or Buddhist deities next to each other in their homes.

The Chettis can be recognised by their Hindu names which indicate their Indian roots. They mostly speak “bazaar Malay” interspersed with Chinese and Tamil words. This has given birth to a unique language called the ‘Chetti Creole’ which has no written script. Even today Sanskrit is used in their religious ceremonies along with Malay and Tamil words. Grandfather is called thatha as in Tamil but grandmother is nenek from Malay.

Holding on to their customs

The Chettis are devout Shaivites and have steadfastly followed the religious and traditional customs with some interesting additions. Festivals are observed with much fanfare, Diwali being the most important one.

Following the tradition of the Chinese and Malays, the Chettis bury their dead. From the Chinese, they have adopted the tradition of ancestor worship which is reflected in their celebration of ‘Parchu Pongal’ where elaborate meals are cooked and laid out on banana leaves and the forefathers invited to partake these.

During the festival of ‘Dato Chachar’ most members of the community travel back to Gajah Berang. The festival is not just a Chetti celebration but showcases how the Chettis bonded with other communities due to inter-marriage.

As part of the tradition, a statue of Goddess Mariamman is taken out in procession from the Sri Muthu Mariamman Temple at Gajah Berang and a pair of ‘Hantu tetak’ or demons from Malay folklore accompany the deity to protect it. The procession stops at a Chinese temple to show respect to the deities there. Local Chinese often join the procession and offer coconuts to the goddess along the way.

Today, the number of members of the community is dwindling fast. Many Chettis have married into other communities, and due to their adaptive nature, assimilated into the culture of their spouse causing the Chetti Melaka traditions to disappear. As many traditional and elaborate religious ceremonies are difficult to follow, these are losing relevance. Modern dressing styles have taken over the traditional garb that has been restricted to special occasions. Very few people speak Chetti Creole now.

In recent times, there has been a growing awareness about the need to save the Chetti culture before it disappears. Despite dilution of their Indian ethnicity, the Chettis have survived for so long because of their flexibility and willingness to adapt. In today’s changing world, the Chetti Melaka community offers important lessons in survival by adopting and respecting local culture while retaining their original flavour.